Liz and I are having a bit of a dry spell when it comes to Geocaching since we arrived in China over two months ago.  For starters, we have been extremely busy getting settled into a new job, apartment, and adjusting to a new culture.  China has been different than other countries we have visited on this trip, and Geocaching has been extremely difficult for us so far.  It’s crazy to think that a country of this size, and having a population of over 1 billion people, only has 777 Geocaches to be found.  The least populated state in the U.S., Montana, has 7,789 caches.

Obstacles to Geocaching in China

One of the biggest obstacles for us is getting used to the language. Well, it’s more like sounds and symbols to us.  The Chinese language is a tough one to understand, and reading it is even more difficult. Coming from the States, there is no rhyme or reason for the symbols.  So tasks like ordering dinner can be extremely challenging.

We are living in Guanghzou, China and specifically, in the Panyu District.  Guangzhou is slim on geocaches overall, but in our part of town, there are literally ZERO geocaches to be found. Even though we are in the 3rd biggest city in all of China, the nearest geocache to our home is about a 30 minute bus or subway ride away.

As a result, planning out our geocaching adventures here requires more time and planning in advance, as well as navigating.  Not like navigating on our Garmin Oregon 650T to cache locations, but rather navigating the public transportation – like the bus and the underground train.  Check out this photo of the bus station route (below) — just figuring out where we need to go is like solving a massive puzzle cache!

In January I had to travel to Beijing, China for 10 days of training for my new job.  During this trip to Beijing, I was sure that I would be able to get out and finally find our 1st Chinese Geocache.  Easier said than done.

Knowing the history around Tinan’men Square it was exciting to finally see and walk around this place.  And finally I was able to log our first virtual Geocache in this historic location!

So I moved on to a cache that was a little bit of a walk away.  I came to GZ and to a gorgeous dome museum.  My geo-senses told me where the cache was hidden, but it wasn’t as easy as just grabbing it.  I had to look and dig around a little to grab it.  Sounds easy enough, but not for us westerners.

Normally I wouldn’t think twice about making a big effort to find this cache at home in America, but here in China I stick out like a sore thumb. There is no way to blend in around here.  One thing that I did not expect when coming to China is just how much of a minority Westerns are around here.

Being a big guy from the South, with blonde hair and blue eyes, I draw attention everywhere I go.  Not only is it rare to see a person like me in China, but there are some Chinese people who have never even seen a westerner before!   Even just walking down the street here, both Liz and I get stares, giggles, and honks (yes, I get honked at too).  We even get asked to take pictures with other Chinese families, like we are a celebrity or something.

So our Geo-Stealth is severely compromised in China!

Geocaching around 1 Billion Muggles is extremely hard.  And if someone were to stop us to ask what we are doing, we would never be able to explain (we might not even know what they are asking us!).  This makes being stealthy even more important when geocaching around China. 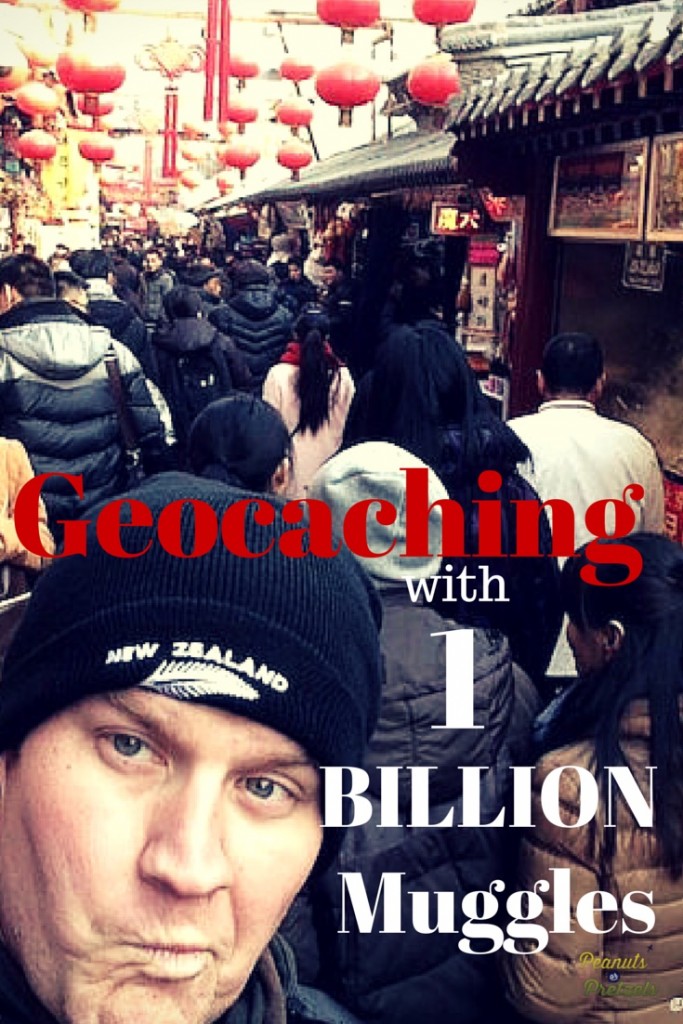 As disappointed as we are to only have 2 finds thus far, and for them to be Virtuals, we are still optimistic. We know our dry spell won’t last too long.  There are also a lot of possibilities for hides too.  Since we will be living here for some time, perhaps we can place a couple more caches around our area.

I never thought I’d say it, but I can promise you that we will do a big happy dance when we find our first physical Geocache here in China…even if it is just a 1/1 cache. Where are my LPCs at?!?!