Planning a trip to Seattle Washington is more than just seeing the famous Space Needle.  While this is one of the top tourist attractions in Seattle, there are many other places to see in Seattle.  Growing up in the Pacific Northwest, I’ve had many trips to Seattle and I still love visiting this city.  Whether it was just for a weekend, or for a longer trip.  There are just so many fun things to do in Seattle.  It has dramatic views of the sea, with the funky vibe of many of it’s neighborhoods, make for a large variety of activities you can do on your own, and iconic Seattle city tours.

So to help you plan a trip to Seattle, we’ve put together this Travel Basics – Seattle Travel Guide.

Seattle is accessible by Interstate Highway 5 (I-5), which cuts through the middle of the city north to south.  It is a city known for its bad traffic (third in the U.S. behind Los Angeles and New York), so it’s recommended that you fly in and depend upon car rentals or public transportation.

Located in Seattle’s southern suburbs, the Sea-Tac Airport is a major hub for the Northwest and West Coast.  But it’s also a major airport for international routes between the USA and the Pacific, Asia, even Europe and Dubai.  The Sea-Tac airport is about a 25-minute drive into downtown Seattle without heavy traffic, but much longer during rush hour.

To get into the city from the airport, you may opt to take a taxi or get a rental car; however, you can also take the Seattle Light Rail train right into the city center.  Trains run regularly from about 5 am until 1 am (except Sunday when it ceases at 11 pm), and trip takes around 30 minutes.  Tickets cost just a few bucks and can be purchased from vending machines at every station.

You could also look into getting a day pass or an Orca Card that can be reloaded – a great option if you are going to use public transportation around town during your visit. Commercial shuttle buses and vans cost between $5.00 to $12.50; while not faster than public transit if you’re going downtown, they have more room for luggage. You have a good choice of long distance buses and vans to outlying destinations and to the ferry terminal to the San Juan Islands.  A taxi costs $40-$50 plus tip, and lasts for about 25 minutes.

Get Around Town & Beyond Seattle

Renting a car is definitely an option in Seattle, especially if you plan to spend a lot of time exploring outside the city and taking day trips to scenic areas.  I’ve driven a car in Seattle many times.  However, be aware that parking will be difficult to find within the city (and very expensive).

Seattle can have notoriously bad traffic, so you may also use other modes of transportation.  Visit Seattle Transit’s trip planner to help you get wherever you want to go in Seattle.  Prices are relatively inexpensive, and it can be a convenient alternative to get to between popular areas.

Hop On / Off Trolley

You could get around town on public transportation, or you could take something a little more fun, like the Emerald City Trolley!  Tickets can be purchase for 1-3 days, and you can hop on and off at popular attractions all around town.  It’s super convenient for tourists and can make it a lot easier to navigate your way around Seattle’s main attractions.

Amtrak provides service all along the west coast.  You can technically ride the train from southern California all the way north to Vancouver, Canada.  So this is also an option for some travelers.  In particular, the route up to Vancouver isn’t terribly expensive. The closest to a “central bus station” is the Greyhound Terminal, also south of downtown.  Community Transit runs express buses in and out of Seattle and its outlying areas.  Click here for schedules.

Bicycling is a good option for getting around Seattle, due to its extensive system of trails and lanes, comfortable weather, and cooperative drivers, who are more used to bicycles than many major U.S. cities.  You can pick up a free bike map at locations throughout the city, including the Seattle BikeStation, located downtown next to the train station. All Metro buses can carry up to three bicycles on front racks, for free, and daily bike rentals are available several places downtown, for $45.00 per day.  Seattle also has a ride share program accessible through computer apps.

Seattle is a moderately safe city, especially for tourists. However, being a large city, commons sense safety rules apply. Keep your valuables securely on you, and don’t leave them visible in a parked car.  Be aware that Downtown Seattle does have a high population of homeless, but few are dangerous.  Take care, especially when going out in areas you don’t know at night.

Seattle is famous for its gloomy rain, but its weather is actually very pleasant, especially during the summer.  November through March are its gloomiest days, with cool temperatures and rainy skies.  November is the most rainy month of the year.  But the weather from April through October is quite outstanding, with highs in the upper 70’s and very little rain. Although winds are heavier in the winter, Seattle is not that windy, especially during the summer.  Being a coastal city, the winters are mild with very little snow.  In fact if there is a snowstorm, the city will practically shut down.  Most of the snow is in the higher mountain elevations outside the city.

There is a wide variety of hotels in Seattle, it really all depends on how much you want to pay and what kind of experience you are looking for.  There are some inexpensive hotels near the airport, but you will be away from the action.  Staying closer to downtown is more convenient, but it’s a pain if you have a car (and parking is expensive).  If you don’t have a car, I think staying near downtown is the best and most convenient option. We’ve stayed in budget hotels in Seattle, hostels right across the street from Pike’s Market, and we’ve also stayed in Airbnb’s in Seattle.  Overall, it really depends on your personal preference and budget.  Use the search box below to browse hotel deals from many different websites, or click here to search hotels. 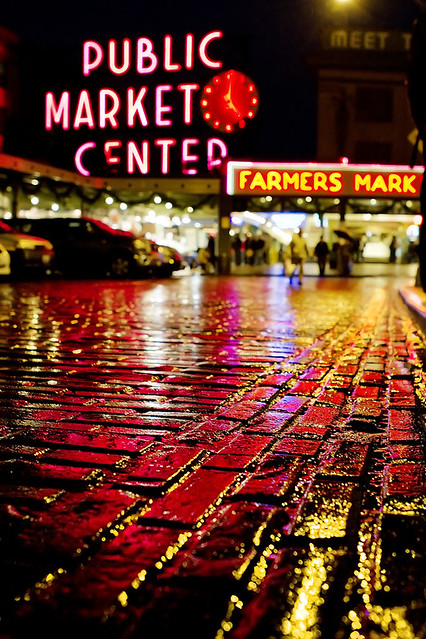 Downtown Seattle:  the city’s retail center, includes the waterfront and boardwalk area, the famous Pike Place Market, and the aquarium.

Pioneer Square-International District: the oldest neighborhood in Seattle, with art galleries, dozens of restaurants, and a lot of history (including the famous Seattle Underground Tour).

Capitol Hill-Central District: diverse, densely-packed group of neighborhoods, and known to be a popular area for Seattle’s LGBT community.

University District: the University of Washington (“U-Dub”) and its nearby neighborhoods.

After numerous visits to Seattle, we’ve put together a list here of some of the most popular Seattle attractions for tourists as well as some great Seattle City Tours that you may want to check out during your visit!  Even if you only have a layover in Seattle, you can definitely squeeze in some of these great Seattle sightseeing ideas. 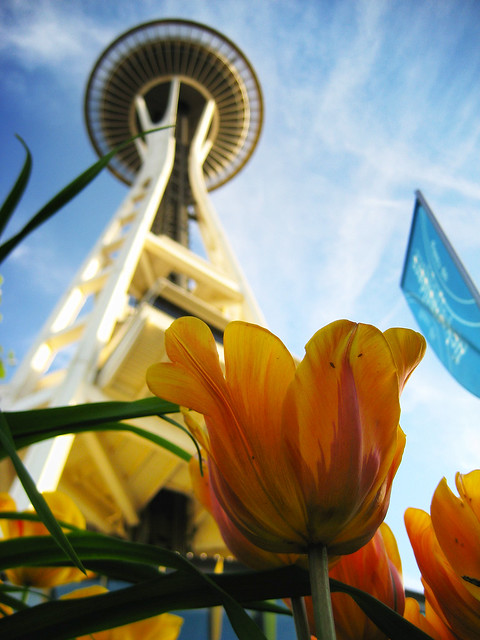 The Space Needle is located at “Seattle Center” and is one of the most popular spots for tourists.  Taking a ride up the elevator and looking out over the city and Puget Sound is definitely a must do.   Another popular site at Seattle Center is the Chihuly Garden and Glass.  If you love the art of blown glass, then why not check out the collection of one of the best known glass artist in the world!  Wow – is all I can say about this place.

Pike’s Place Market is famous, and a must see in Seattle.  You can explore this market on your own or take a Behind the Scenes Pikes Place Market Tour.  Who knows, if you are lucky maybe you will be able to do the famous fish toss / catch (like Josh did!)  Pike’s market is right downtown, only a block away from the waterfront boardwalk area (with activities, shops, games, food), as well as the Seattle Aquarium.

Oh and if you are a coffee lover, don’t forget to visit the original Starbucks coffee shop nearby too.

You can purchase your ticket for the Space Needle in advance, so you don’t have to waste your time standing in line (especially if it is a busy day).  Or you can go ahead and grab yourself a Seattle City Pass.  This tourist card is actually good for multiple attractions around Seattle, such as the Space Needle, the Seattle Aquarium, the Pacific Science Center, the Experience Music Project Museum, a Harbor Cruise, the Woodland Park Zoo and the famous Chihuly Garden & Glass

If you are looking for something a little different from the traditional touristy sites in Seattle, then be sure to read our post 5 Things to Do in Seattle Besides the Space Needle and Pikes Market!

Another popular activity in Seattle is to travel out into Puget Sound to see the famous Orca (Killer) Whales!  While you may happen to see the whales on any kind of boat or ferry, the best way is to take a guided whale-watching tour in Seattle.  There are many companies to choose from, but booking in advance will give you more control over your schedule and itinerary — a great option if are tight on time because of a weekend trip.

Experience the rich Native American and tribal history of the Seattle area by taking a cruise out to Blake Island to enjoy the Tillicum Village Culture Experience.  Dine on a tasty buffet that includes Salmon, watch a traditional song and dance performance and wander the island.  We’ve done this tour ourselves, and it was one of the coolest experiences.  It was a beautiful show, the food was great, and it was a lovely boat ride out of the city.

If you like beaches and are visiting Seattle during the perfect summer months, then check out Alki Beach.  This is one of Seattle’s most famous beach areas.  There are wonderful biking trails, and restaurants that line the waterfront.  A relaxing and enjoyable way to spend a nice day in Seattle!

For a unique idea to sightseeing in Seattle, how about trying Geocaching.  Geocaching is a FREE scavenger hunt game, and Seattle is actually the home of Geocaching!  Check out our Geocaching page to learn more about this game and how we incorporate it into our travels.

For those of you interested in airplanes, you may love the idea of taking a tour of the Boeing facility, just south of Seattle!  See where and how the planes are built, enjoy the interactive exhibits and even see the new “Dreamliners” yourself! If you want to get out of the city for a day, especially to see the natural scenery surrounding the city of Seattle, then one of the most popular trips is out to Snoqualmie Falls.

Having a rental car makes this trip easier, but if you don’t have a car, consider taking a day trip to see the Snoqualimie Falls and possibly some wineries too.  Another popular day tour outside of Seattle is to famous Mount Rainer.  This dormant volcano rises large and mighty behind Seattle’s skyline.  Again, you can explore Rainer on your own or you can take a day tour of Mt. Rainer from Seattle.

Have Fun Planning a Trip to Seattle!

We wish you well during your trip to Seattle and hope that you have fun planning your visit.