Looking out the airplane window as we prepare to land, on one side I see blue ocean but on the other I see a barren black lava rock landscape. It was a stark contrast from the lush paradise we came from in Maui. I’m sure Josh was wondering what kind of a place we were heading to, but I could hardly contain my excitement. It’s been 19 years since I’ve landed at this airport, Kona on the Big Island of Hawaii, was responsible for making me fall in love with the true spirit of Hawaii so many years ago.

My Favorite Airport in the World, So Far…

Upon landing, we exit the aircraft on an open air ramp and walk into an open air airport. This is one of the reasons Kona holds such a special place in my memory. As a teenager arriving here for the first time, I felt like I was in such an exotic destination! I mean, how often do you fly into an airport that is completely out in the open like this?

We arrived super early in the morning, which was great because we basically had a full day on the island. After a quick stop in Kona town for breakfast, we headed up to Waikaloa and the Kohala coast. This part of the island is extremely dry with lava rock all around. Josh said it felt like we were on a different planet. 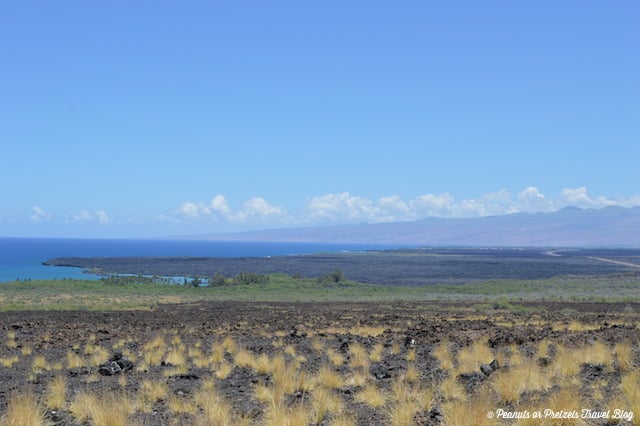 The clear blue ocean looked so inviting, and for being in Hawaii for a week already, we realized that we hadn’t gone swimming in the ocean yet! Aside from dipping our feet in on Maui a couple times, that was it. So we decided to pull over into Hapuna Beach, just off the highway. It was a beautiful state park and well maintained beach. The waves were crashing pretty hard, and we had a blast jumping around in the waves for a couple hours.

After our swim, we hopped back in the car to continue up the Kohala coast.  It’s crazy how you can suddenly go from dry, volcanic rock landscape to lush jungle in a matter of minutes!  That’s exactly what happened as we made our way from the northwest side of the Big Island to the northeast side. We decided to continue all the way up north as far as we could drive on the highway.

We enjoyed driving through the small towns and visiting a side of the island that doesn’t see many tourists. We even drove all the way to the end of the highway, at Pololu Valley Lookout. We would have liked to hike down into the valley, but our legs were still so tired from hiking in Maui. You have to first walk down into the valley, then climb back up! So it’s deceiving because it’s easy on the way down. We heard many people say it is a difficult hike, so we decided to observe the lush green valley and ocean below from a distance.

Couchsurfing For the First Time in Waimea

Next, we drove the highway down to Waimea, where we stayed the night. This was actually the first night that we would go “couchsurfing.” For those of you not familiar, couchsurfing is an online network of hosts who open them home for people to stay for free. It may be just a couch, a futon, air mattress, or bed in a spare bedroom. This is a community where you can socialize online. Viewing profiles, reviews and photos to help get to know other people. You have to request to stay with someone, and they have to accept.

Couchsurfing is definitely not for everyone, but it is a great budget option for travel and it’s a great way to meet other laid back and social people. We enjoyed chatting with Joe (our host) and his girlfriend. They were kind enough to share their spare bedroom with us, and even gave us a great recommendation for dinner at a local restaurant in town, and an AWESOME breakfast restaurant the next morning…which had the biggest “side” of pancakes we had ever seen in our lives!

We Learned that Some Fish Can Climb Waterfalls!

We left Waimea and took our time exploring the coast on the way to Hilo. We made a stop at the Waipio Valley lookout, and it was just as beautiful as people said it was. Unfortunately, only four wheel drive cars are allowed down the road, and it is a brutal hike. So we gazed from afar at this sacred valley along the northeastern coast.

Next, we made our way further down the coast; making a few stops at lookouts and small towns along the way. Then we headed to Akaka Falls State Park. We took a nice and enjoyable walk (not difficult) through a bamboo forest and other lush greenery, and finally arrived at a stunning 400 foot waterfall! Most shocking was that we learned about local fish and shrimp that actually climb up the waterfall – seriously! I never knew there were species that could do that, pretty crazy!

We passed through Hilo pretty quickly to make it to the Mauna Loa macadamia nut farm and factory. Josh has found a new love for chocolate covered macadamia nuts, and I don’t blame him…they are so yummy! The facility is very easy to get through and you drive through 3 miles of their orchards to get to the visitor center.

There is a really cool self guided tour with video monitors that describe the process. In fact, did you know that it takes 300 pounds of pressure to crack the macadamia nut shell? That’s a tough nut! After the tour, we browsed the store and tasted many different samples. So be sure to make a stop if you are in the area, it’s a fun and free activity! 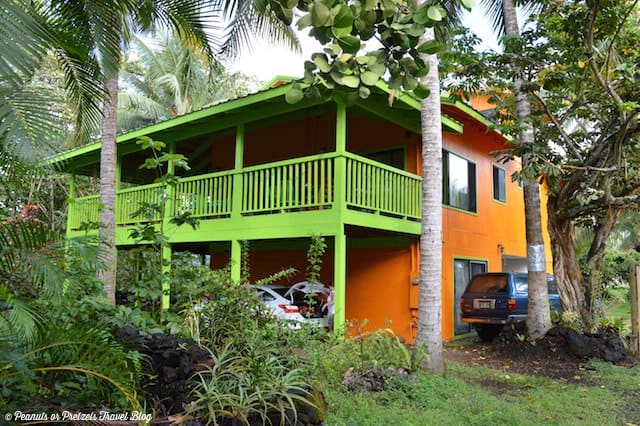 Our accommodations for these two nights was actually an Airbnb past Pahoa on the southeast corner of the island, out in Kapoho on the water. The neighborhood is actually about 200 yards from some of the best snorkeling on the island, in the nearby lagoon and reef. We met Jeannie, our wonderful host at her house. 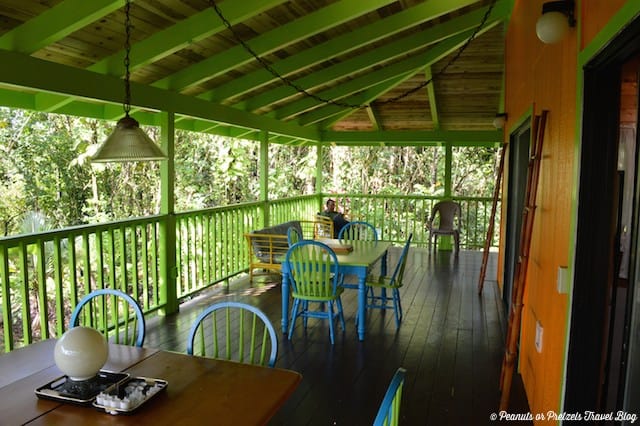 The home was absolutely beautiful, crafted in cedar. The island vibe was everywhere and we loved the open air living with the massive patios outside surrounded by lush tropical foliage. We really enjoyed our visit and wish we could have stayed longer, but we will definitely keep in touch with Jeannie.  Read more on AirBnB HERE

The next day we spent a full day exploring nearby Volcanoes National Park, and absolute must!!! It just so happened that we were visiting when they were celebrating the birthday of the National Parks, so it was free! Regardless, we would have paid because it is SO worth it. But it was a nice surprise. 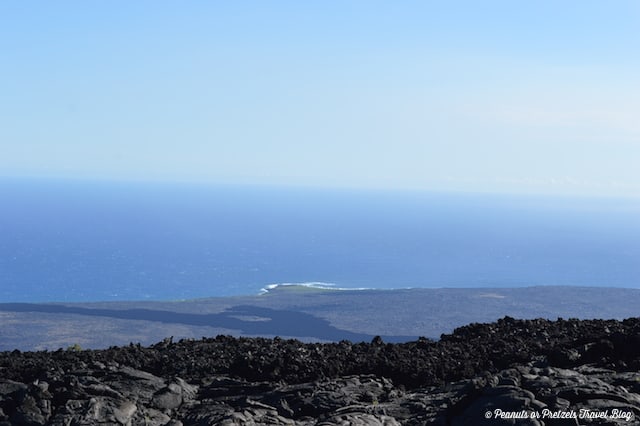 It’s crazy to think that you are visiting an active volcano! But it’s an incredible park. According to Hawaiian legend, this is where Pele lives; the goddess of the volcano. She is responsible for birthing new land, as the island continues to grow from ongoing lava flows.

We overlooked the massive Kilauea crater, and the giant steam plume that floated up into the sky. After “cleansing” myself in nearby steam vents, as the ancient Hawaiians believed women could do, we hiked through an enormous lava tube that used to be filled with flowing lava to the sea. Then we drove down Chain of Craters road down to the sea, across numerous lava fields from years past. The landscape was constantly changing, but near the coast, it was very desolate with recent lava flows. In fact, the road ends along the coast line due to a lava flow that covered the road! 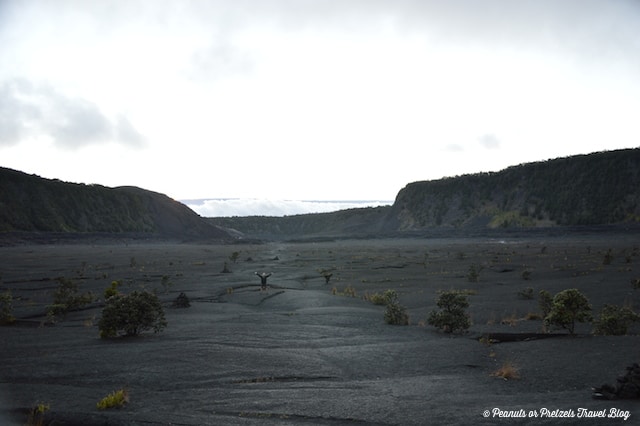 Lastly, we actually hiked into one the craters to stand in the bottom just before dusk, before heading back up to the main caldera to experience the nightly glow of the lava lake, which isn’t visible in the day with the naked eye; but at night the glow is incredible and proves there is lava in there!

Read more about our trip to Volcanoes National Park HERE 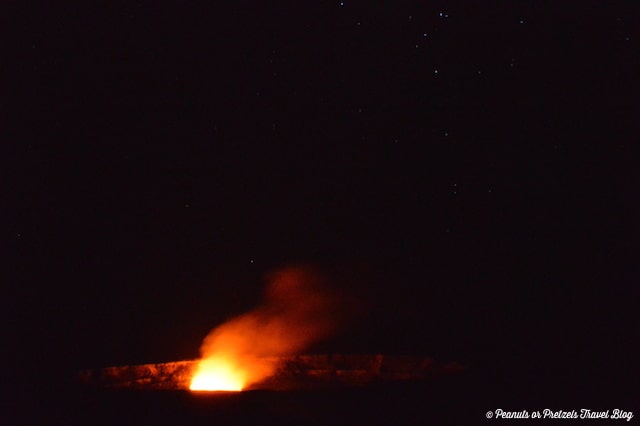 A Bit of Luxury & Adventure in Kona

We rounded out our time on the Big Island of Hawaii by returning back to Kona on the west side of the island. After a quick stop at the Hula Daddy Coffee Plantation to pick a few beans and learn about famous Kona Coffee, we arrived at the beautiful Sheraton at Keauhou Bay.

After camping on Maui, couchsurfing and sharing an B & B, it was really nice to kick back and relax at a resort for a couple days. Typically, we are not resort people. However, the Sheraton at Keauhou Bay is the perfect blend of what we look for during our travels. Not only was it a nice to pamper ourselves for a couple days, but the grounds are historic and they embrace the history. We went on cultural walks, sailing on the bay, learned the play the ukulele, hula, and even make fresh leis.

Another highlight of our stay at the Sheraton at Keauhou Bay was that we got to mark off one of our top bucket list items, night snorkeling with the giant resident Manta Rays! Yes, you read that right…snorkeling at night! We had the most amazing experience out on the bay with our guides. Using a noodle to float flat on our stomachs, we held onto a surfboard that had on the bottom with our faces in the water.

With all the lights from other snorkelers and the clear water, we were able to see a beautifully illumated under water world! And we were lucky enough to have an up close encounter with a number of Mantas. The light attracts the plankton, which they feed on. So mantas were gliding all around us, and some even coming up to our face. We couldn’t have asked for a better experience, and those memories will stay with us forever!!!

Last But Not Least, a Little Trip to the Spa!

Of course if we are at the beautiful Sheraton at Keauhou Bay, we couldn’t pass up a chance to check out their amazing spa!  Especially given the fact that they offer treatments out on a balcony that overlooks the ocean.  We were able to relax in a jacuzzi and look out at the beautiful blue water, then have a massage outside too.

The temperature outside was perfect and there was a gentle breeze coming off the water.  That combined with the sound of the waves crashing against the black lava rock made for a perfect setting.  As the hostess said to us “who needs air conditioning and a CD…this is the real thing!” 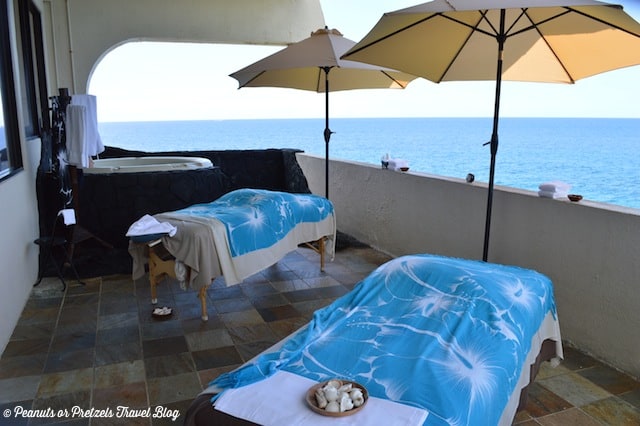 Our next stop is Oahu, the main island where the big city of Honolulu is located. Every island of Hawaii is a totally different experience, and it will be quite a shock to go from the big island to a major city. But we are ready to have some rest and relaxation with family who live there. So until next time. 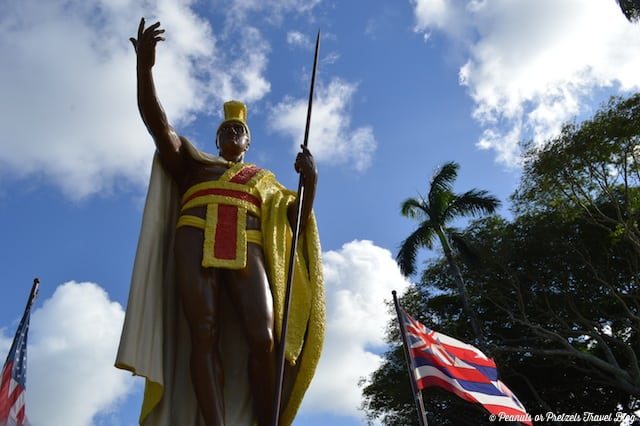 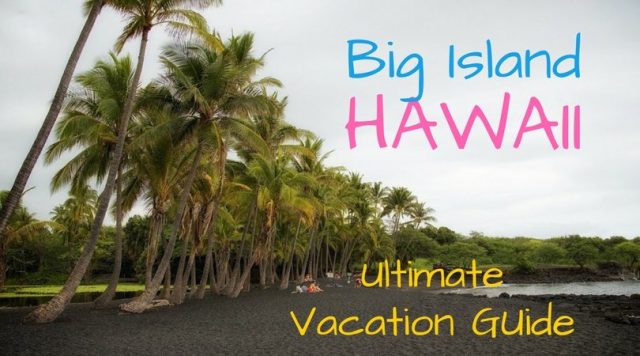 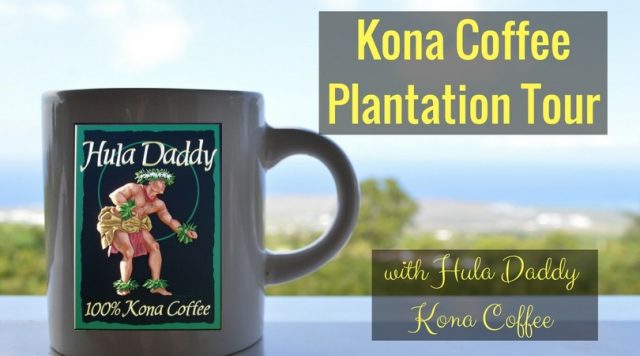 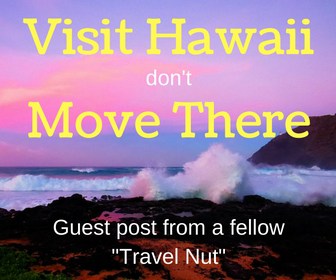