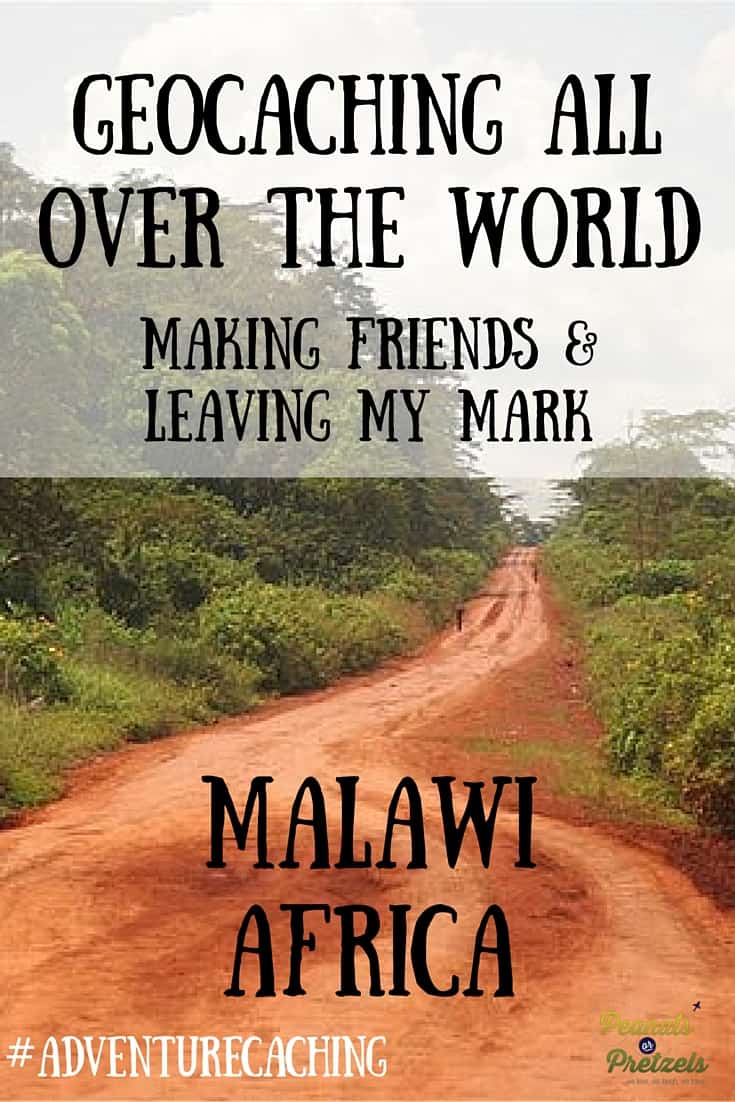 In recent years, I’ve been lucky enough to have travelled to a few far flung places; mostly as a volunteer but also with work. Like “Peanuts or Pretzels” I’ve sometimes combined this with teaching English (also in China) and always, where possible, involving Geocaching!

I love making new friends on my travels and enjoy introducing them to Geocaching. However, finding a cache can sometimes be a challenge as I seem to have developed an unconscious habit of travelling to areas with almost no caches at all, and no reward in the form of a souvenir.

My first such journey was to Malawi in Africa.

There were one or two caches in the area where I was living, but they seemed to not have been found for a while…and were probably missing.  They were also on top of mountains and so I gave them miss, rather than traipse up a mountain in the fierce African sun, just for a probable DNF.

So my first cache “find” was (A Rift Through Africa GC4K3RZ), an EarthCache on the shores of the magnificent Lake Malawi.  I had escaped for a weekend and had this cache, with the theme of the Rift Valley and the lake forming a part, firmly in my sights.

I hired a canoe for the afternoon, paddled around the coast awhile and soon arrived at GZ.

The tasks were simple enough, but I had to bribe the National Park Ranger with a bag of mangoes as I had no cash on me; not realising that this was part of the park!  I tried to explain about Geocaching but sometimes the language barrier is just too much! 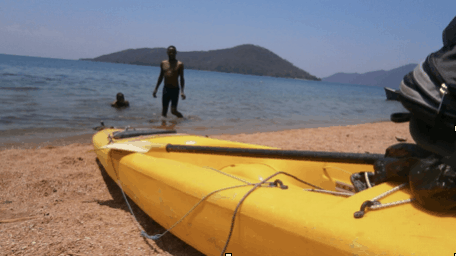 This was a fantastic location but I still really wanted to find a physical cache.  The following week I returned to the area with some colleagues who humoured me on the way home by stopping close to the amusingly named (Monkey Bay GC4JZ7F) which was atop a rocky outcrop.

However, I was thwarted yet again as we spent over an hour up there in flip-flops and no hats and found nothing but lizards! 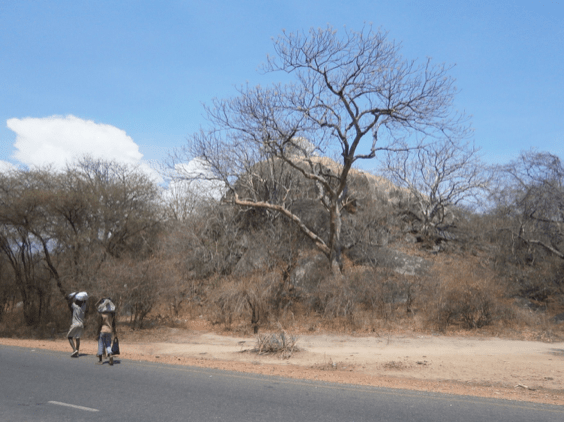 Back at home I told my local friend Blessings about my adventures.

Having no access to expensive technology such as GPS or a smartphone he was fascinated about geocaching.

One afternoon, we together placed a cache nearby that he still looks after for me to this day!  I wouldn’t normally place a cache so far from home, being unable to maintain it easily, but Blessings is the guardian of my cache (Rift View GC4T230) which overlooks the great Rift Valley – the best view of any cache I’ve placed to date!

I do like to leave my mark, however, and so I’ve developed the habit of placing an Earthcache if I find a suitable location, such as this one:  (The Red Soil of Malawi GC4N0EV) 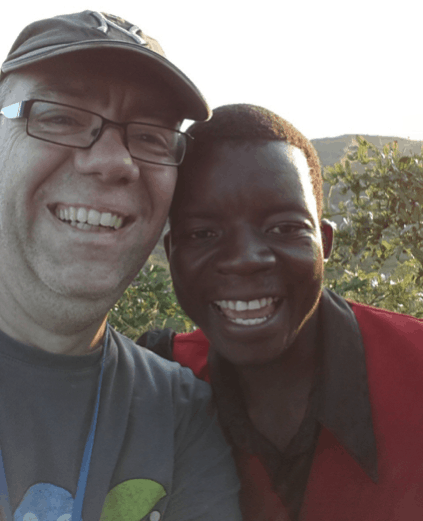 After the meeting was over, the CEO spotted my GPSr and asked if I was going to look for their Geocache.

I was delighted to hear that they knew of Geocaching, as most of the other caches in the country (10 in total!) had been placed by visitors or ex-pats.  He was so proud of it that he offered to show me where it was!

I explained that I’d like to find it myself if I could, and so I nipped round to the back of the building and located the cache on the grill of a rear window; only a nano but it felt so good! 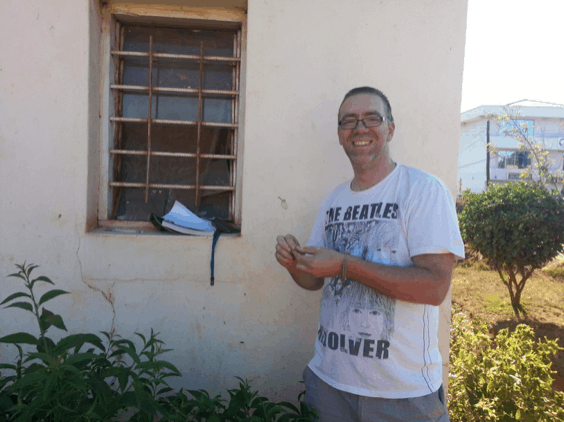 My 3500th Geocache at Victoria Falls

A few days later, on a footbridge over the Victoria Falls in Zambia I found my 3500th cache, a virtual cache (Victoria Falls, Zambia GCGZZ6).

Again, a fantastic location but there’s something special about finding an actual container.  Another Earthcache soon followed but I’m going to have to return to Africa if I want to find more tupperware!

My friend and host that week, Kelly, was fascinated, however, by my hunt and has since become a cacher herself, although she’s had to cross into Zimbabwe to find any containers.

On one hunt she had to be escorted back to the road under armed guard but that’s her story to tell! 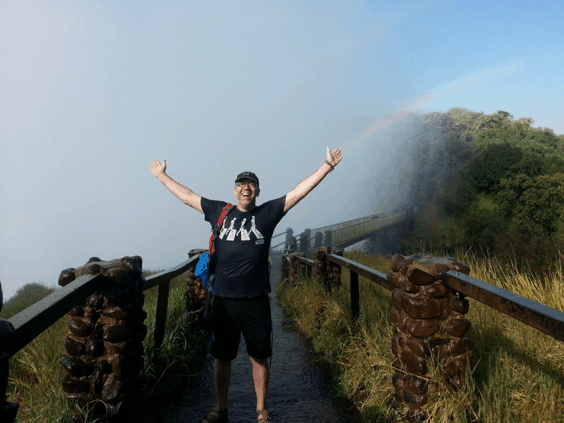 Fast forward a year, and this time I was on my way to Baoding in China.

A quick glance at the map showed that there were no caches in the city and the nearest ones were in Beijing, an hour away on the bullet train. I did hold a litter picking event on CITO day to get the souvenir but only I attended! And so when my new friends Naomi (also from the UK) and Caffrey, a local guy who had become our friend and guide, suggested a trip to the capital, I had only one thing on my mind!

Our first call that day was a trip to Tiananmen Square. This was, yet again, an unforgettable experience but the only cache allowed there, with armed guards all over, was another virtual, (Tiananmen GCA209).

Later that day, however, having explained caching to my companions, we together found 2 small caches in the nearby Behei gardens. Caffrey, who clearly assumed that I was a fantasist, was amazed when we found them and wished there were more that he could find nearer to home.

He has, however, also become the guardian of a cache that I placed near his home (Caffrey’s Cache GC5V9WG) (FTF still awaits if you’re interested!) 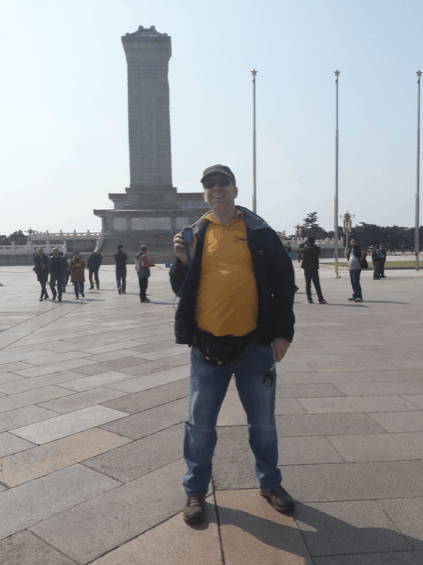 At the end of this trip I was able to visit Hong King for a few days, where I met up with some local cachers at an event I held at the Hard Rock Cafe. It was such a contrast to be in an area where there was a thriving caching community! They pointed me to a few local favourites, including some up at The Peak, overlooking the city and its harbour where I placed another Earthcache, (Lugard Falls GC5WRX2). It seems to get found several times a week! 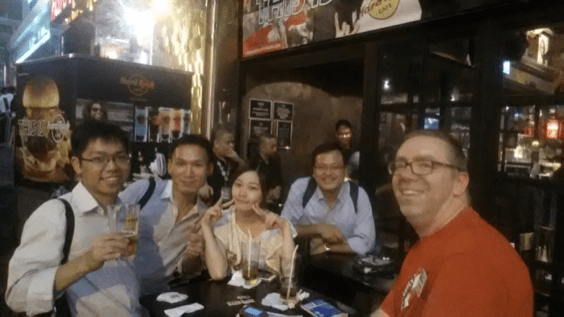 I’ve always known that caching can be a great way to make friends, but I never imagined that I would today be in contact with cachers as far afield as Zambia, Australia, Hong Kong and Brazil.

I always try to hold an event when I’m travelling, whether overseas or in the UK and I’ve always enjoyed the experience. If you’ve never done this I highly recommend it!

You can hear of my travels from time to time on this very popular UK geocaching podcast, run by my very good friends Pete and Tracey aka The Amasons: www.thepodcacheshow.com