Standing along the Ping River on this warm, tropical night in Chiang Mai, Thailand, I gaze up into the sky filled with thousands of fiery dots floating among the stars during the Lantern Festival. I’ve imagined what this scene would feel like, and it’s even better than my dreams.  We are literally surrounded with floating lanterns rising upward in the sky.  As if that wasn’t enough, I look down into the river and see an endless stream of candles and flowers floating down the river.  At times, it almost appears like the candles floating on the river are reflecting those lanterns floating in the night sky.  This dramatic scene plays out each year in November at the Loy Krathong Lantern Festival in Thailand. 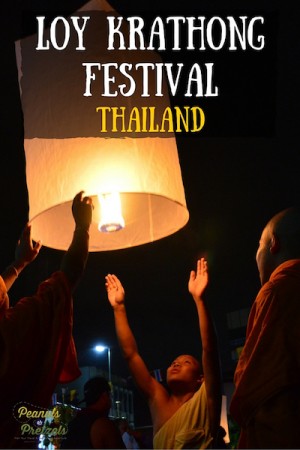 Looking over at Josh and the smile on his face, I’m reminded of how fortunate we are to be making memories like this all over the world. We were actually in Koh Samui, Thailand just a couple days ago when we decided to make the trip up here to Chiang Mai for the Loy Krathong Lantern Festival.  Even though I have always wanted to attend this event, I didn’t realize what time of year it took place.  So when I stumbled across a mention of it online, we knew we couldn’t miss out!  So we hopped on a plane a couple days later to experience Loy Krathong first hand.

When is the Loy Krathong Lantern Festival in Thailand?

Here in Thailand, the annual Loy Krathong festival is a time to celebrate the passing of one year and the beginning of a new one.  Held each year in early November, coinciding with the full moon, it is a highly anticipated event.  Here in Chiang Mai, the primary activities were held over 3 days. From concerts, to parades, to beauty pageants (they love those here in Thailand), cultural shows / dances, fireworks, and of course lanterns.  It’s a festive time of year to plan a visit to Thailand!

When we arrived in Chiang Mai, the town was already decked out. Colorful lanterns were hanging all around town, and the area near the Tha Pae gate entrance to old town was being set up with stages, booths, and lights.

We had found the perfect accommodation near the old central area of Chiang Mai.  It was a homestay on the east side of Old Town, literally a few minutes walk from the Tha Pae gate.  So we were in the heart of all the festivities — a really fantastic location for the event!

Make a “Krathong” to Float Down the River

The Loy Krathong festival is celebrated mainly in Thailand, but also somewhat in Laos, Burma, and Malaysia.  The literal translation means “to float a basket” and refers to baskets made of buoyant items like banana tree trunks or bread, and decorated with leaves, flowers, candles and incense.  These are lit and set afloat in water.

(NOTE:  Cheaper ones are made for tourists with styrofoam, staples, and plastic…DON’T BUY THESE!  They are not biodegradable and hurt the environment.  Proper Krathongs should be made with completely biodegradable material, right down to the sticks used to affix the leaves rather than metal pins or staples.)

Luckily for us, a friend at home introduced us to a friend of her’s via social media who was traveling in Chiang Mai the same time as us. We met up with Katherine and she told us about an event she heard about where we could make our own Krathongs in a traditional, completely biodegradable way.  And better yet, the cost was just a donation to a local charity.

We headed over to Jane’s Kitchen, a restaurant in old town, where we met Jane.  Her café makes some incredible food and awesome smoothies, but on this day, her small restaurant was filled with flowers and plants and people getting all creative!  After we made our donation, we ordered some smoothies and sat down at a table to start putting our crafting skills to work.  Jane gave us a quick demonstration on how to make the Krathongs so they would float, and then we got to work.  It was so much fun to unleash our creativity and make something that we could later use to participate in the festival.

Launching Our Krathong & Cleansing Ourselves For the New Year

The Loy Krathong festival coincides with the end of the Thai lunar year, which is usually in November.  The purpose of setting the baskets afloat in the water is to signify the end of the year by not only saying goodbye, but releasing any kid of bad luck or bad feelings from the previous year.  The goal is to”cleanse” yourself of anything bad so that you can begin the new year fresh.  Some people will even put some of their hair or finger nails on the Krathongs as a way to release part of themselves along with the Krathong into the water.

So when nighttime had approached, we headed over to the river with our homemade Krathongs and prepared for our celebratory moment.  For this festival, you will find that many areas in town along the river will have platforms made, ready for you to launch your Krathong.  We found an easily accessible one made from bamboo – floating right out into the water. They even had torches lit that you could use to light your candles and incense.

All three of us took turns lighting our Krathongs, and carefully kneeling down to the water.  We took a moment to ponder the previous year, the good and the bad, and then finally setting off our Krathong into the river and watching it float away; eventually, mixing in with all the others downriver.  It was a beautiful and moving sight to behold.

Launching a Khom Loi Floating Lantern Into the Sky

The iconic scene of the entire Loy Krathong festival, or really any festival in Thailand, are those beautiful floating paper lanterns in the sky. These are called Khom Loi.

The Khom Loi are sent off for many occasions all over Thailand to signify good luck and wishes for love and happiness.  For Loy Krathong, it is a great way to set off a wish for the new year, since you have just sent off a Krathong in the river to cleanse yourself of the previous year.

You will see these Khom Loi lanterns being sold all over town. Ideally, they too should be made of natural materials, including bamboo and paper, so that when you launch them in the sky they will eventually burn up completely.  Josh, Katherine and myself decided to head over to a nearby Wat (temple) where we could support the monks by buying the lantern from them, and set it off from the temple grounds.

We each took turns writing our wishes for the new year on the paper lantern with a marker, then a young monk helped us light the lantern and prepare to set it off into the night sky.  Seeing our lantern fly high into the sky with our wishes, and mixing in with thousands of other wishes from others for the new year was not only incredibly beautiful, but an inspiring sight that we will never forget.

Participating in Loy Krathong Was a Dream Come True!

After launching our lantern, we continued to walk around town enjoying the festivities.  Looking around, I saw crowds of people from all walks of life participating in this festival.  Families with young kids, older couples, teenagers, and even foreigners.  It seemed that everyone was encouraged to join in on the fun together.  And seeing thousands of wishes from people all over the world floating into the heavens was one of the most moving experiences I’ve ever had as a traveler. Definitely, a dream come true for this world traveler. 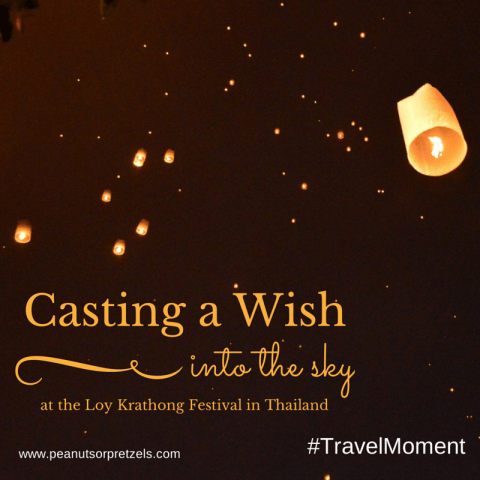 Plan Your Trip to Thailand With Our Complete Thailand Travel Guide!