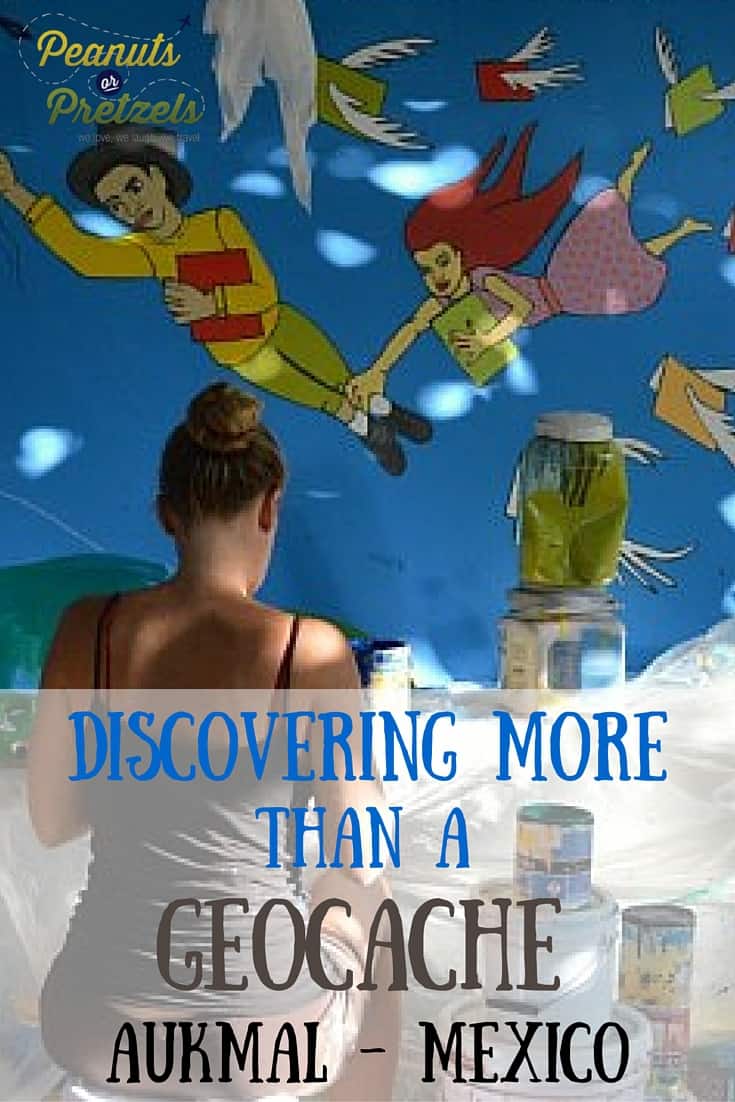 For this installment of our “Beyond the Postcard” series, we wanted to share a memorable experience that we had in Mexico; where seeking a particular Geocache provided us with a reminder of the kindness and charity of humanity.  As Liz and I were making our way up and down the east coast of the Yucatan Pensula in Mexico, we planned on doing a bit of geocaching.  During our research about the caches around our itinerary in Mexico, we noticed that there was a highly favored geocache at a library in a town called Aukmal.  Never having done a library cache before, we had to give this one a go. I mean, who can say they’ve been geocaching in a library?

Akumal, Mexico – “Place of the Turtles”

Aukmal is a small beach town known for its sea turtles, in fact, the name “Akumal” is a Mayan word meaning “place of the turtles.”  We first drove through the town, consisting of a lot of beach front homes for expats and foreign visitors, and found a great restaurant on the beach where we could have a snack and a drink while listening to the ocean waves.

Afterwards, we made our way over to the library.  This particular day just happened to be Halloween, and although the days after are more festive & meaningful for the locals (“dia de los muertos” or “day of the dead”) we did notice a group of kids walking in costume toward the library.  The group seemed to be congregating in front of the library entrance having some sort of party, so we stood back at first out of respect.  Then we noticed one woman who looked to be running things, and she came over to us and introduced herself.

Her name was Anne, and she had such a bright glow about her.  She was smiling from ear to ear as we introduced ourselves and told her were in search of her geocache.  We didn’t even have to explain, she knew exactly why we were there!  She confirmed that we were in the right place and that the cache was inside the library. We asked her what type of library this was, because honestly this did not look like any type of library we have seen, nor what we had expected.

Read Also about our Driving Adventures around Mexico

Anne explained that Hekeb Be Biblioteca was a volunteer library run by a non-profit dedicated to helping the local the kids in the area.  The provide a valuable (free) after-school program for the local children with classes in English, art, music, environmental education, as well as help with their homework.  Their goal is to excite the children about learning and encourage them to stay in school.  They receive no funding from the local, regional, or federal government and rely entirely on donations & volunteers.

Anne further explained to us that the library is not only a great resource for the local kids, but it also gives them a safe place to gather and play.  When we visited, we learned that the library had taken on an even larger role because the local teachers had been on strike for several months (yes, months)!  So the library has become even more valuable to the community because Anne and her staff have essentially become teachers too, providing the only kind of schooling the children of Akumal were getting at the moment!

While Anne was explaining the situation of the community and library to us, you could see the smiles on all the kids faces as they were running around playing in the playground.  It was immediately apparent that they respected Anne, as if she was a mother to a lot of the kids here.

Anne depends on volunteers to help run the library, whether local expats or visitors who make time during their visit to help out.  She also explained that some people come by for several hours while on vacation, they may read to the kids or help with their English, or put other skills to work.  In fact, we met a volunteer from Australia who had been in the area for some time, their resident “painter” and she happen to be painting a giant mural while we were there.  We also met a man from Canada who was helping with their website.

We were so touched to hear about Anne and her work that she was doing for the community.  And what’s even better is that she has found a way to bring awareness to the organization and the cause to many people from around the world…when they stop by to find the Library geocache!

After she finished explaining her charity and what she was doing here in Aukmal, she pointed us towards the library and said  “you are on our own to search out the geocache, all I can tell you is it’s inside the building.”  Liz and I had never done a library cache before, so we had no idea what we were looking for.  So we had to go to our clue, which gave us a couple vague hints, but we figured out what section of the library it would have to be located (based on the clues).

Once we were in the right section of the library, Liz looked all through the books, then her face lit up and she reached up to pull out a particular book; the geocache!  This cache was cleverly disguised among all of the other books, and I wouldn’t have been able to find it myself, but that’s what Liz is good at; so it would only make sense she that she made the find.

This geocache was literally a book with a big hole in the inside pages cut out to make it like a box.  Once we opened the cache we noticed it was filled with trackables from all over the world and tons of fun swag items to trade with.  The book itself was also the log, so we signed the log, dropped off some personal trackables and picked up a few others to take with us.

After finding the cache, we stayed for a bit longer to chat more with Anne and some of her volunteers as they worked on their projects.  In the end, we left with much more than a smiley and a cache find, we walked away with insight into the kindness and charity of people like Anne and her volunteers who work to make the community of Aukmal a better place for the youth in the area.  What a great idea to hide a geocache here so that we can all be a part of it & be able to spread the word.  We would like to extend a special thanks to Anne Gabbert for her dedication and all the great work that she is doing! To learn more about the Hekab Be Biblioteca (Library) and Akumal, Mexico, please visit the pages below & consider making a donation or volunteering with this organization on your next visit!