Our boat bobs up and down on the glorious turquoise water on this brisk morning. The misty air feels refreshing on our faces makes, and breathing in the incredibly fresh air makes us feel alive! Clouds move quietly all around us, periodically uncovering the towering mountain peaks around us.

There is no shoreline to separate the water from the land, just steep cliffs that plummet deep into the water. Adding to the drama are numerous waterfalls, some that trickle down the cliff-sides into the water, while others thunder. I always thought that this type of mystical place could only be found in Norway, but here we are in New Zealand; at Milford Sound. 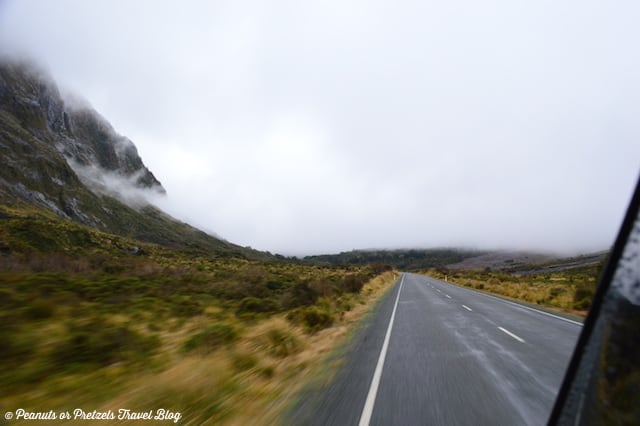 Getting to Milford Sound, on the South Island of New Zealand

Milford Sound is located on the southwest corner of the south island of New Zealand. If you are flying into New Zealand, then Queenstown is the nearest major city and airport. Yet it is still a good 4 hour drive to Milford Sound from Queenstown. If you fly into Christchurch, Nelson, or the North Island, then you will need a couple days of travel.

Most of the drive from Queenstown is easy, and it is beautiful country. The town of Te Anau is the last major town before getting deep into the wilderness. This windy and scenic highway makes for an awesome road trip. We are traveling in a campervan, so we have the luxury of camping at any of the sights alongside the road. Ultimately, we pull off to camp at one alongside a raging river, and a waterfall. Not a bad sound to fall asleep to.

The Homer Tunnel Transports You to Another World of Magnificent Scenery

The road to Milford Sound was an engineering feat, and the whole area is a testament to the skillful avalanche management, due to the treacherous terrain and dangerous weather conditions.   Signs are everywhere warning about potential dangers. As Josh begins to sound concerned, announcing each “beware of avalanches” sign, we arrive at the Homer Tunnel.

The Homer Tunnel is a 1.2 km tunnel goes directly through the solid granite of the “Homer Saddle” and mountains that divide the area.   When the road first opened, it was a single lane, gravel road through the tunnel…the lonest such in the world!  Eventually, the tunnel was widened and the road was sealed however, it is not safe for two buses to pass inside the tunnel.  And when we visited, there were traffic lights outside each entrance to the tunnel, guiding the flow of one-way traffic only.

Upon exiting Homer Tunnel, our eyes were shocked with bright daylight…and an incredible vista. It was as if we exited the tunnel on a different planet! We were suddenly in an enormous valley, surrounded by towering mountains…and more waterfalls than we could possibly count. Being early spring, the recent rains combined with the melting snow and glaciers made for streams of water cascading downward all around us.

The two of us literally gasped out loud. We had to pull the van over right away to take in the beauty of this scene, and to snap some photos of course! We were surrounded by giant, steep mountains and cascading waterfalls…more than we could possibly count.  This is mother nature at her awe-inspiring best. 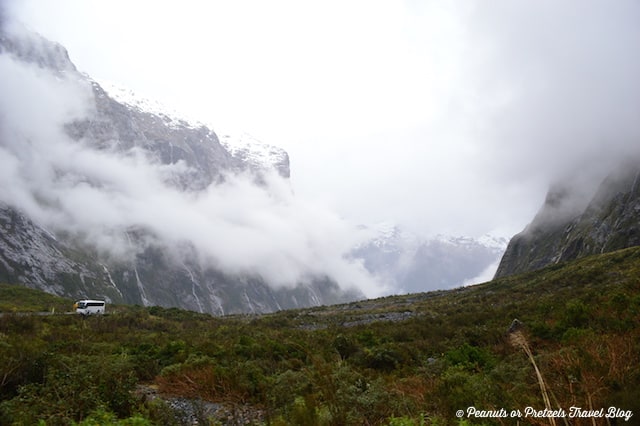 There isn’t a real town at Milford Sound, it is primarily a day destination. There are a few bits of accommodation, but not much. The main thing to do is explore the outdoors through hiking, fishing, and boating on the water. Because of the beauty of the destination and the visitors that are attracted here, the main activity is to take a scenic cruise.

You will find many tour operators that have guided cruise tours of Milford Sound. Tickets can be purchased online, but we actually purchased our tickets on site when we arrived. We timed our arrival so that we would be there first thing in the morning, before the day tour groups arrived from Queenstown. So we were able to get on one of the first boats out.

Having a Small Boat Tour if Milford Sound is More Fun!

There are many options for cruise tours on Milford Sound, from large boats to small boats. Some offer activities and additional excursions, like kayaking or visiting an underwater observatory. Others have large buffets over lunch time, and there are a few overnight excursions that will even take you out into the ocean.

We were lucky to get on a small boat tour, which is what we wanted. Having a smaller boat with less people gave us a much more intimate experience. Plus compared to the larger boats, we found that our small boat had more space to stand outside overlooking the water. As soon as we boarded we grabbed a spot on the upper deck, right in front of the captain at the bow of the boat. It was a perfect viewpoint.

Being on a smaller boat, our captain was able to take us right up to the sides of the sheer mountain cliffs. We loved being able to see everything up close, including a colony of seals. We saw fish jumping and birds soaring around us, it was nature’s beauty at its best. We even went underneath waterfalls — supposedly for good luck, where we got drenched with ice cold glacier water! Luckily, we were able to go inside the boat to warm up if we needed to. And there was free hot coffee and tea available.

Cruise Tour of Milford Sound, or Should I Say Fjord?

There was a guide who would narrate over the loud speaker, telling us all about the history of the area, and explaining the geology and nature surrounding us. One of the first things we learned is that Milford Sound is named incorrectly. It should be Milford Fjord. The difference between a Sound and a Fjord is that a Fjord is created by a giant glacier, which carved it’s way through. By contrast, a Sound is technically a valley carved out by a river or rushing water, which is then flooded by the sea.  So Milford Sound is actually named incorrectly, but the name has stuck anyway.

Small Boat, Big Waves – An Entertaining, Yet Short, Trip into the Open Ocean

The captain of our boat took us out into the mouth of the sound, where it meets the ocean. The waves were quite large on this morning, but the captain was in a playful mood. The boat launched up over the top of waves and crashed down into the valleys. The resulting wave of water that splashed into the boat soaked everyone on the bow of the lower deck. Luckily, we were on the upper deck…just out of reach of the water. We were splashed, but not soaked. The revelers on the lower deck embraced the experience, and everyone was laughing and having a good time.

On the upper deck, we bounced around like we were on a carnival ride. The captain continued to play in the waves, bouncing us all up and down. We held on to each other and the handrails to keep from falling — but it was all in good fun. Everyone had a blast and laughter filled the boat. After a good 10-15 minutes of playing in the waves, the captain took us back into the calm waters.

Cruising Milford Sound Should Be on Your New Zealand Bucket List!

I had always known that I wanted to visit New Zealand one day. And back when we started researching destinations for our Around the World Trip, I discovered a place in New Zealand called Milford Sound. Everyone said that it was one of the most beautiful places they had ever seen, and the pictures didn’t disappoint. Having a love for the outdoors and natural wonders around this Earth, I immediately fell in love with what I saw in the photos.

Now that I had the chance to experience Milford Sound for myself, I can honestly say that it lived up to the hype. Milford Sound was one of the most beautiful places that I had ever seen, and it truly is an unforgettable experience. It should definitely be on every New Zealand visitor’s wish list.

Want to daydream about being in Milford Sound?  Click here to watch our video — 2 Minute Vacation: Milford Sound!