We have been travelling to Japan fairly regularly over the last 6 years and the first time was by a stroke of luck. We were looking for a ski destination in January and wanted a place that was both cultural and provided a decent amount of snow. This is where we happened upon a traditional village, where a fire festival was occurring and there was a promise of a lot of powder and hot onsens. This enticed us to visit this then relatively unknown village and for our first visit to Japan. We have subsequently visited Japan annually ever since, maybe twice one year. If you go to Japan, and we have by no means been everywhere, these are our suggestions of what we think you will really enjoy.

Of course we are going to recommend ourfavourite village of Nozawa Onsen, which delivers on all fronts. It is a bullet train ride from Tokyo to Nagano and then a lovely old train ride to Nozawa Onsen. There is work however that is nearly completed, which will see the bullet train go directly there. The village delivered and still delivers on everything that attracted it to us in the first place. For powder hounds you have reached nirvana. For culture vultures this is phenomenal. Nozawa is a traditional and small Japanese village where the people work hard, and the amount of food outlets is staggering. People just open their doors to accommodate the guests. The entire village is a must go to destination if you want an authentic Japanese experience and enjoy lovely hot onsens with the villagers.

There is so much to recommend about Kyoto, home of the geisha and where you do see them wandering around. As the old imperial capital it is full on history, culture and just a really great place to visit. Cherry blossom time is when most people go, but we were there in October and the place was just as totally charming. Despite being a city it has a really comfortable feel about it. We also were lucky enough to happen upon the Jidai Matsuri Festival in Kyoto, which was a huge display of costumes throughout the ages. The Japanese are extremely good at festivals, many of which are not advertised. Kyoto is easily reached from Tokyo and a good day you can see MT Fuji. Staying at a ryokan, a traditional Japanese inn which we did,  or even one of the temples will only make your experience in Kyoto more significant.

The Snow Monkeys of Jigokudani

You have seen the photos of the snow monkeys but nothing prepares you for the spectacle of these Japanese Macaque taking an onsen. It is located very close to Nozawa Onsen and not far at all from Nagano. The walk through the forest to get to the monkeys is one of the most beautiful walks imaginable. Along the route you can often look down into the valley where there are some ryokans and see naked men bathing … with the snow monkeys in the steaming hot onsens. When you get to the actual monkey onsens,  it is simply incredible as you watch some foraging and others bathing and others just mucking aorund. There are the babies and the big fella watching that everything is right with his tribe.

Takayama is a little city located in the heart of the Japanese Alps on the main island of Honshu. It is about 2 hours by shinkansen (bullet train) from Tokyo to Nagoya and then another hour on the JR Hida express through stunning countryside.

Takayama has so many things going for it. It stills retains much of the feel of a traditional village particularly in the lovely Old Town. Here they have the most sensational food, particularly the Hida beef, which is much like Wagyu beef for a very small price and it, is delicious. The little town has a river running through it and is home to a huge festival twice a year where the magnificent floats that have been used throughout history are bought out. The Hida Fold village is also close by. For a day trip it is fantastic to go the Shirakawa-go a UNESCO site where you can see the traditional gassho-zukuri farmhouses, some of which are more than 250 years old.

There is so much to see and to do in Japan but these are our recommendations. We hope you love them as much as we do.  Japan is a mystical and unique destination where you will never be disappointed.

I was not going to let Tokyo go because it is actually a really great fun place. As the capital city of Japan it is very large but doesn’t feel overwhelming at all. 2 myths to dispel are that it is difficult to get around and that it is expensive. Both of these are untrue. For a start get a volunteer guide and that way you have someone to show you around and teach you how to use the transport system. These guides are people who just love their city and know so much about it. They will show you where to eat so that you are not paying a fortune, how to buy the essential Suica pass and take you wherever you want to go. There are some brilliant districts, each virtually with its own theme. Akihabara is where all electronic geeks go, while Harajuku is where you see all of the strangest fashions, Ginza and Shibuya remain firm favourites. The district that we stay in is Ueno, which is highly accessible to everything as well as having a lovely big park, zoo, museums, and crazy night markets.

There is so much to see and to do in Japan but these are our recommendations. We hope you love them as much as we do. We didn’t mention so many things like the shrines and the temples but you can be sure that these abound everywhere. Japan is a mystical and unique destination where you will never be disappointed. 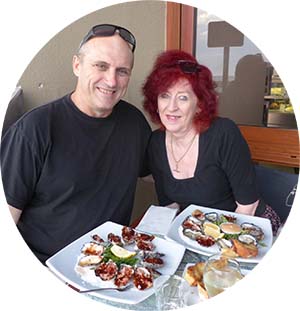 Contented Traveller likes the shabby chic houseboat in Amsterdam, the tatami mat in a ryokan in Japan, the cave house in Goreme. We do on occasion do the 5 star like an over water bungalow in Vanuatu or Bora Bora. We like to ski, to have backstreet massages in Chiang Mai and to have a beer with locals in Ghent. That is who we are. We organise our own travels. That is what we do and we are pretty good at it.

Be sure to check out their website at http://www.contentedtraveller.com/