Settled along the Yangtze River Delta and the Chinese coast, Shanghai sits as a shining gem of modern technology and Old World charm. Her name means “Upon-the-Sea” and that is exactly where she resides. Steeped in a proud history, this city now flourishes as a hub for international trade and finance. During the last two decades, Shanghai has become one of the fastest developing cities in the world and a popular destination for tourists. Renowned for its historic landmarks and metropolitan culture it is also known for being the birthplace to everything modern in China.  In this guide, we’ll give you all the details for visiting Shanghai, as well as popular areas to visit and things to do!

Getting In/ Getting Out

This city is one of the leading air transport hubs in Asia. There are two commercial airports here in Shanghai, each with their own amenities and services offered:
Shanghai Pudong International Airport: Located on the south bank of the Yangtze River in east Shanghai, is about 30 km (19 miles) away from the city’s center. This is the main international airport with several flights coming in and out of the city per day. Most of the international flights will come through this airport.  Visit  http://en.shairport.com/pudongair.html for more details.

Passport holders from the 51 countries and regions of the world can enjoy a 72-hour Visa-Free Transit when taking an international transfer via Shanghai Pudong Airport or Hongqiao Airport. And now, Since January 30, 2016, if traveling in Shanghai, Zhejiang and Jiangsu, visitors can now enjoy a 144 hour Visa-free transit! This is perfect for a 3 day vacation stopover in China, while you are on your way to another destination (and you don’t need to apply for Chinese visa). Click here to learn more about Visa Free Transit in China.

Once you have arrived at the airport there are quite a few transportation options to choose from to take you from the airport into the city. Just choose the one that is right for you:

Ship: Coming in by cruise line? Shanghai Cruise Port of Call is a major hub for all Asia Pacific cruises. There are three International Cruise Terminals here:

Shanghai has an extensive public transportation system including metros, buses, and taxis. It is rather fun to experience as Shanghai’s technology in transportation is more advanced than other cities. Payment on all modes of transportation can be made by using the Shanghai Public Transportation Card which can be purchased at any subway station.

This rapid transit system includes the subway system and the light railway lines traveling to every core district throughout the city as well as neighboring districts. This is the fastest and most comfortable way to get around the city as there are 14 different metro lines, and 329 stations. The subway signs are labeled in English and Chinese. The fare depends of the length of travel distance starting at around 3 RMB. It is important to note that the Metro is not a 24 hour service. You can see a complete Metro schedule and timetable at: www.travelchinaguide.com. You can also download a free metro app into your phone or device at www.exploreshanghai.com that will give you a complete map of all metro stops while you’re on the go. 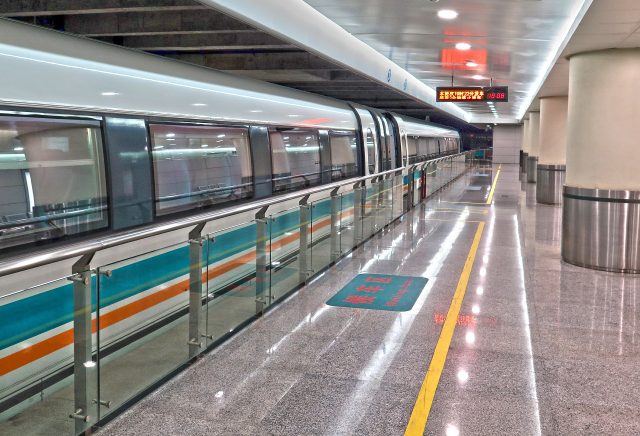 Shanghai has the world’s most extensive network of urban bus routes, with nearly one thousand bus lines, operated by numerous transportation companies. Bus fare normally costs 2RMB. You can find a complete bus schedule at www.travelchinaguide.com.

These can always be found in Shanghai. They are the most expedient form of transportation, except in rush hour. It is important to remember that most taxi drivers do not speak English. It is a great idea to take one of your hotel’s business cards with you to show to your driver so you get to the right hotel. You can also download a language translation app that you can directly talk into your phone and it will translate. Translation books are always a good idea.

This is a fun way to get about the city and one of the most cost effective. Bicycles can be obtained cheaply and it is a fun mode of transportation allowing you to take your time and stop where you want to stop between your destinations. Laws have recently banned the use of bicycles on main roads and expressways but there are plenty of bicycle lanes to be traveled throughout the city.

There are nine basic routes to convey travelers between east and west Shanghai. The Ferry terminal can be found at the southern end of the Bund on the west shore and at the southern end of Riverside Ave, at Dongchang Lu, on the east shore. There are five other routes across the river that use the tunnels. A fun tunnel to take is the Waitan Bund Sightseeing Tunnel which has glass covered tram cars that glide through a subterranean light show which includes music and a narrative!

Some Travel Tips for Tourists:

Shanghai is one of the most populated cities in the world.  While it is quite a safe city to visit, there are pickpockets and other petty crimes that prey upon tourists. Stay smart. Here are some safety tips to keep in mind: 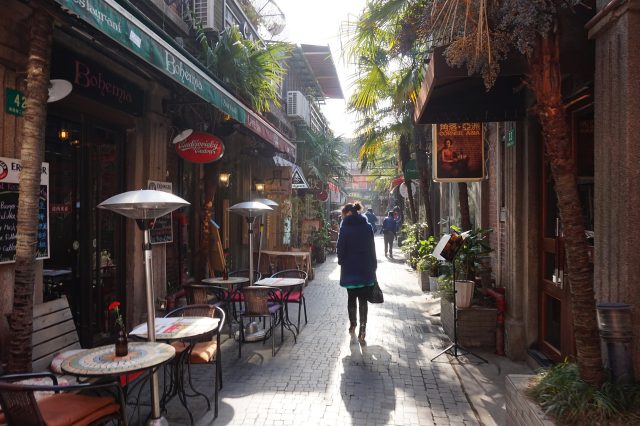 Watch Out for One Another: Watch your surroundings and keep tabs on everyone in your party. Make designated meeting locations should someone get lost.

Watch Your Stuff: Be mindful as you would at home.  Don’t put your bags down to take photos, and watch your valuables at all times.

Money: If you feel worried, you can use a money belt or fanny pack instead of wallets or purses which can easily be stolen. Backpacks can be easily broken into if slung over your shoulder in a crowded location, so it’s best to keep them in front of you in crowds where you can watch the zippers.

Be Smart: Be alert when buying souvenirs around tourist attractions. These are crowded places where thieves love to dwell. Keep a protective watch over your money. Also pay attention to what the money looks like. Souvenir store owners have been known to dupe customers by giving them old money that is now worthless.

Scams: Just as in every large city in the world, there are a lot of scammers about that love to prey on tourists. Do your homework on the internet before you leave; read what other tourists have experienced so you will be prepared to avoid the same pitfalls and can then enjoy this beautiful city.

Pollution: Air Pollution is Shanghai is low compared to other Chinese cities but it is still a problem compared to the air quality in most of the rest of the world. It is always a good idea to bring along some allergy medication in case you have a reaction to the air.  And if the air is bad on a particular day, masks are very cheap and can be bought in most convenience stores.

Shanghai has a humid, subtropical climate. Winters are chilly and damp with cold northwesterly winds from Siberia causing nighttime temperatures to drop below freezing. Summers are hot and humid, with an average of a little over 8 days exceeding 95 degree Fahrenheit. Expect the occasional downpour or thunderstorm during this season. Typhoon Season in Shanghai is during the summer and early autumn. The best time to visit beautiful Shanghai is in the spring or autumn months. 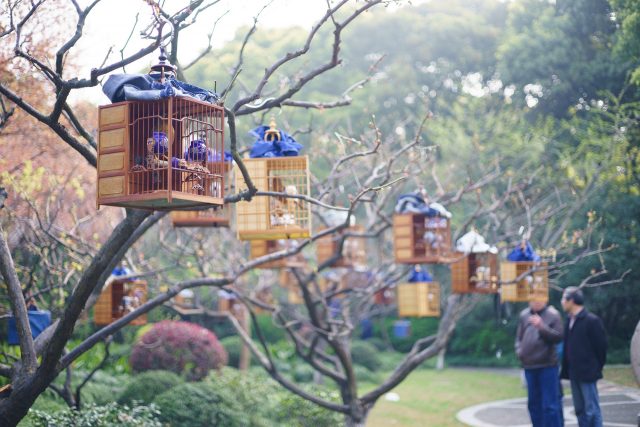 Part of Shanghai’s charm is the amount of festivals and sporting events it hosts each year. A few suggestions are commented on below for your convenience in planning your trip to this fascinating city.  Each festival is unique and showcases another facet of this glittering city. Some fun Shanghai festivals to plan your stay around are:

Shanghai is home to amazing sports talent. Why not see a game? 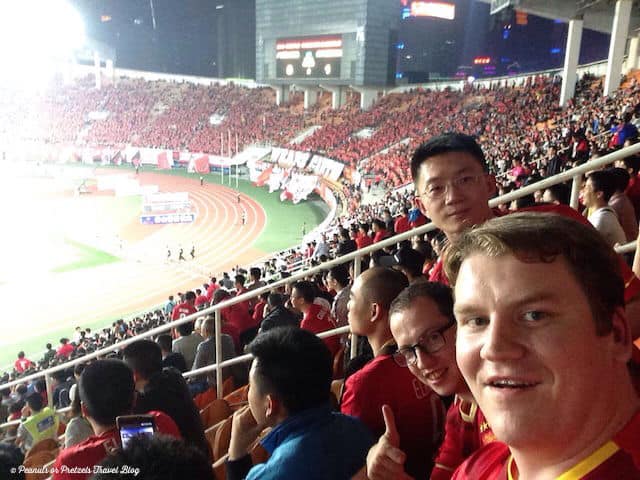 This city is a maze of neighborhoods all offering something to entertain the tourists! Enjoy everything from spectacular entertainments, monuments, shopping, and sight-seeing, museums and wonderful food, sports, and more.

There are so many Points of Interest in Shanghai to boast about. Here are just a few crowd- pleasers:

Time to Start Planning Your Visit to Shanghai!

Shanghai is a dazzling city to visit whether you are a novice traveler or a seasoned pro. Steeped in Chinese history and old-world traditions this city also amazes the world in new cutting-edge technology. You can search the world over and not find another city like this beautiful city by the sea. Come for a visit and leave feeling irrevocably changed.

Save it for later.  Pin It to Your Pinterest Boards and make sure to Follow Our Boards too!