Fairy tales may not exist, but their castles do.  Nearly everyone knows the story of Cinderella, and many of us are familiar with the iconic Cinderella’s castle at Walt Disney World. Most people assume this castle design as being pure imagination…but they don’t realize that there is a real Cinderella castle, Neuschwanstein Castle in Germany.

Walt Disney Disney’s imagination seemed to have no boundaries.  He was a storyteller who always looked for inspiration wherever he went. Having worked at Disney myself for many years, I’ve always admired his spirit and sense of discovery.  As a life-long traveler, I feel a kinship with Mr. Disney and the way that he explored new places and let his imagination run wild with folklore and fairytale stories.

When it was time to build Cinderella’s castle for Walt Disney World, there was one real castle in particular that Walt wanted to model it after.  A castle so grand and so charming, that in real life it does look like it’s straight out of a fairy tale.

When you see the photos of Neuschwanstein Castle, you can see why Walt was so much in love with it.  I mean, who wouldn’t be! It’s just begging your imagination to run wild.  But it doesn’t take much imagination to see the similarities between Neuschwanstein and Cinderella’s castle.  From the blue towering spires, to the rounded windows and doorways leading to royal balconies.  It almost seems like at any moment a princess dressed in her finest royal gown could come into view.

Sadly, Fairy Tales Are Not Reality

Neuschwanstein castle was built by King Ludwig II, the “mad king” as some called him.  He was a mysterious King, who was also very much a dreamer.  He wished to live in a fantasy world, where he could shut out reality around him.  Construction began back in 1868, but it wasn’t completely finished until 1892.  Unfortunately, the King never saw his grand castle fully completed.

King Ludwig II died in 1886, found in Lake Starnberg along with the same psychiatrist who had deemed him insane.  Only 7 weeks after his death the castle was opened to the public.  The irony is that Ludwig II was a shy king, and he wanted to build the castle so that he could escape the public and sort of hide away in his own little world.  Now millions of people visit his castle every year.

How to Get to Neuschwanstein Castle

Neuschwanstein Castle is located at the base of the the Bavarian Alps, along the border between Germany and Austria.  While there are organized tours that could be taken, especially from places like Munich, going by rental car is an option I recommend because you will have more freedom to explore the beautiful area surrounding the castle. 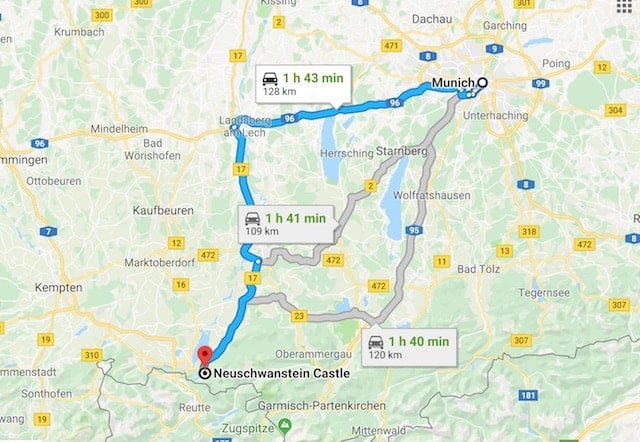 I recommend you pick up a car rental in Munich, then you can drive the A96 motorway west the town of then take the B17 south toward Hohenschwangau. Or you could take A95 southwest from Munich and connect with B23 west to B17.  Either way, it’s a beautiful drive through the countryside of Germany.

The main visitor center for the castle is in the village of Hohenschwangau, below Neuschwanstein castle.  This is where you will find all the car parks too, as well as plenty of shops and restaurants.  Click here for a great map of the area.

We definitely recommend you get your tickets ASAP first thing in the morning, because they do run out of tickets!  Or better yet, get your tickets online up to 3 days in advance to be sure you have one.

You cannot take cars up to the castle, they have to be parked in town.  So you have three options:  you can walk on foot up the hill, you can pay to take a horse-drawn carriage, or you can pay to take a shuttle bus.  Tickets for the carriage cost around 7 Euros uphill, and about half that to come back down.  You can buy the tickets directly from the drivers.  The carriage is charming and a relaxing way to go up the hill.

There are also shuttle buses too for a bit cheaper price, but they hardly provide the ambiance of riding through the tree-lined street up to the castle on a horse-drawn carriage!  But walking is possible, and enjoyable on a cool day.  Yet, it can take 30-40 minutes and it’s all uphill!  We chose to take the carriage uphill, then walk down the hill afterwards.

Expect to spend a good part of your day exploring the castle and nearby area.  If you have time and have rented a car, I personally recommend spending a few days in the area.  The castle itself has a lot to offer visitors, but so do the nearby towns and there are some trails around in the area to explore – and offer superb views!

Your entry ticket includes a guided 30 minute tour of the castle, which is the only way to see it.  The time of your tour is reserved based on your ticket, and they are strict about this.  You can only join your tour at the right time, so if you buy your ticket in advance be sure you are there at the right time – and not just parked…because you have to get uphill to the actual entrance of the castle!

The apartments and staterooms on the 3rd and 4th floors are open and will be shown in the tour.  You will see multiple throne halls, the grand dining room, the salon, the bedroom, the dressing room, the oratory, the study and more.

These rooms of the castle are lavishly decorated and truly magnificent to see for yourself!  But beyond the rooms, walking the outer walkways where you can gaze out the windows over the valley with the lake in the distance really evokes a sense of imagination and wonder.

After the tour, you are able to explore some of the shops and restaurants on the bottom floor, or you can wander on some of the trails nearby.  One of which goes to a famous bridge and waterfall; however, is sometimes closed due to weather or rock falls.  Another popular thing to do is tour nearby Hohenschwangau castle as well, which is at the foot of Neuschwanstein in the local village.  A combination ticket can be purchased for both attractions.

Where to Stay Near Neuschwanstein Castle

The Bavaria region in Germany is full of storybook romance, and idyllic villages.  It is a wonderfully charming area to stay for a few days to explore.  There are a couple great hotels nearby, as well as quite a number of moderate yet comfortable hotels.  Personally, I find the smaller hotels or even family-run B&B’s to be the most memorable places to stay while visiting Germany.

Hotel Muller is a popular place to stay only a half a mile from Neuschwanstein Castle, and the prices include a lovely breakfast each day.  But you don’t need to necessarily stay in Hohenschwangau.  Fussen is a much bigger town not far away, and it has a lovely town area where you can stay and have plenty of options for shops and restaurants.

When my parents & I traveled through here on our European road trip, we were coming from Austria – and we chose to stay over the border in the border town of Reutte, in the Tyrol region.  It was a wonderful little town with some really quaint B&Bs and hotels.  The prices were a bit more affordable, yet it was a short drive to the castles.

Imagine Yourself in a Different World at Neuschwanstein Castle

One of the reasons I loved visiting Neuschwanstein Castle so much is that I really did feel like I was in a bit of a fairy tale.  The charm of the scenery both within and around the castle just cannot be overstated. Combine that with the quintessential villages nearby, food, shops and culture, and it’s easy to see how planning a trip to this region really does put you in a different state of mind. You feel as if you have been transported to a storybook world, and that’s one of the best reasons to take a vacation.