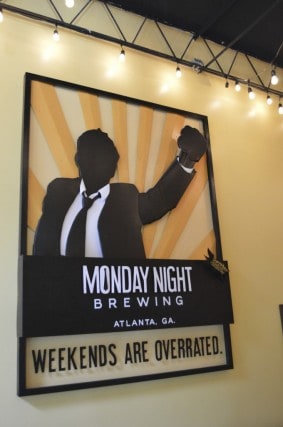 “Weekends Are Overrated.”  That’s the motto for Monday Night Brewing here in Atlanta, Georgia and the spirit we love.  Only a short drive from downtown, the founders truly believe that good beer should be enjoyed any night of the week, accompanied by family, friends, and soon-to-be-friends!

The first thing you will notice when you enter the tasting room at Monday Night Brewing are the neck ties covering one of the walls.  This symbol is very important to the brewery because it represents not only their past, but their overall philosophy; loosening up your neck tie after work and gathering with friends.

Josh and I have been to many breweries over the years, and Monday Night Brewing probably has the best back story that we have ever heard.  It all began years ago during an early Friday morning bible study class.  As you would imagine, getting up super early on a Friday morning isn’t the most exciting thing to do.  And, most people are feeling less than social at that hour of day.

Some of the class members wanted to get to know each other outside of the class (at a more reasonable hour), and Monday nights seemed to be the night that everyone had open.  One of the guys had recently purchased a brew-at-home kit, so he invited the guys over to his garage after work on Monday night to brew some beer together.  It quickly became a weekly event.  Soon, the guys discovered that they were looking forward to Monday nights, when they would leave the office, loosen their neck ties, and brew beer together.

Soon people starting inviting family and friends, then friends starting inviting their friends, and before they knew it Monday nights turned into the best night of the week!  The group realized that they were onto something.  So they put together a plan, and 5 years later they opened Monday Night Brewing; achieving their vision of celebrating everyday with good people, and good beer.

As far as the brew goes, we were impressed.  Both Josh and I loved the FU Manbrew, a Belgian-style wheat beer.  It is their award-winning beer for good reason.  It is so smooth and easy to drink, with a great flavor without being overly heavy like other wheat beer.  We both also really enjoyed the Drafty Kilt Scotch Ale.  This dark malt beer is amazingly smooth with a rich smokey flavor, without being heavy; making it easy to drink while still enjoying a rich flavor.  Josh was also a fan of their IPA, the Eye-Patch Ale; with its crisp, light taste and touch of sweetness.

The atmosphere at Monday Night Brewing makes you feel like you are in someone’s garage with tables, chairs, and couches that overlook a faux fireplace (and one heck of a mustache above the mantel). The vibe is very casual, as if you were meeting friends at their house to chill out.  There are a few games around that you can play, and on this day they even had a projector playing the Saturday college football games across the back wall.  There is also an outdoor patio where you can get some fresh air, and pets are allowed.

We were impressed with Monday Night Brewing.  Not only was the beer fantastic, but it is a truly enjoyable place to gather with friends, make new friends, and enjoy beer that was brewed with genuine love.  So next time you are in Atlanta, be sure to check out Monday Night Brewing and bring a neck tie for their wall!