Everyone is Irish in Dublin 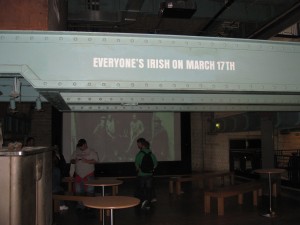 Visiting Ireland and Dublin wouldn’t be complete without going to the top of all the city and have a pint of ‘The Black Stuff’. But we almost didn’t make in time for the doors to close for the day. As we stood out in the rain waiting for the bus outside of St. Patrick’s cathedral, we realized that the bus was really late – and no one seemed to know why it wasn’t coming. We realized that it was getting down to the wire and we were going to miss out on the Guinness Storehouse if we didn’t get there immediately!

Making a gut decision (and in the spirit of beer), we decided to run out into traffic (literally) and hail a cab. We felt like we were in the Amazing Race because we told him we needed to get to the Storehouse as fast as possible. Of course, the cab driver was stuck in traffic and to meet our demands, he flipped a U-turn and drove like a complete crazy person on side streets and weaving around cars…and we made it!

After rushing to the door and seeing that we were the last in line we were hoping that they would let us in. Once inside, we would have plenty of time to explore the museum and go up to the Gravity Bar for our drinks, because they shut the line down early. I think it might have been Liz’s smile that got us our tickets into the museum, and up top for that now well deserved beer.

Walking into the seven story Store House you see all of the history of Guinness. Each floor was dedicated to the history of Guinness from marketing to bottling to the original Lifetime Contract for the property in which it sits on. This place is not going anywhere! It was a thorough museum, and had a lot of interactive elements; really a great place to visit. Now being a foreigner and not knowing the history of one of the oldest beers in the world, to see it was great to see the pride in the country’s beer.

After a quick run through we knew we were short on time and wanted to have that Guinness up top before they closed. So unfortunately we had to skip a couple of floors and head up to the Gravity Bar at the very top.

Once we arrived it felt like an open air roof-top party (surrounded by glass). There was a full 360 degree view of Dublin. So Liz and I head to the bar and admired the careful way the bartenders poured our Guinness. Yes it is an art form.

Now with our beers we can head over and enjoy the views of Dublin. We were in serenity with our favorite beer in the world with an amazing view of a grand city. Even better, with the sun shining in through the glass, it felt like the warmest place in all of Dublin. After stalking some other guests to obtain their seats when they left, we were able to drink our Guinness in bliss while we basked in the sunlight! If we would have waited for that bus, who knows if we would have made it here on time. We may have missed out on this experience. So sometimes, it’s necessary to change the plan. Cheers!!!