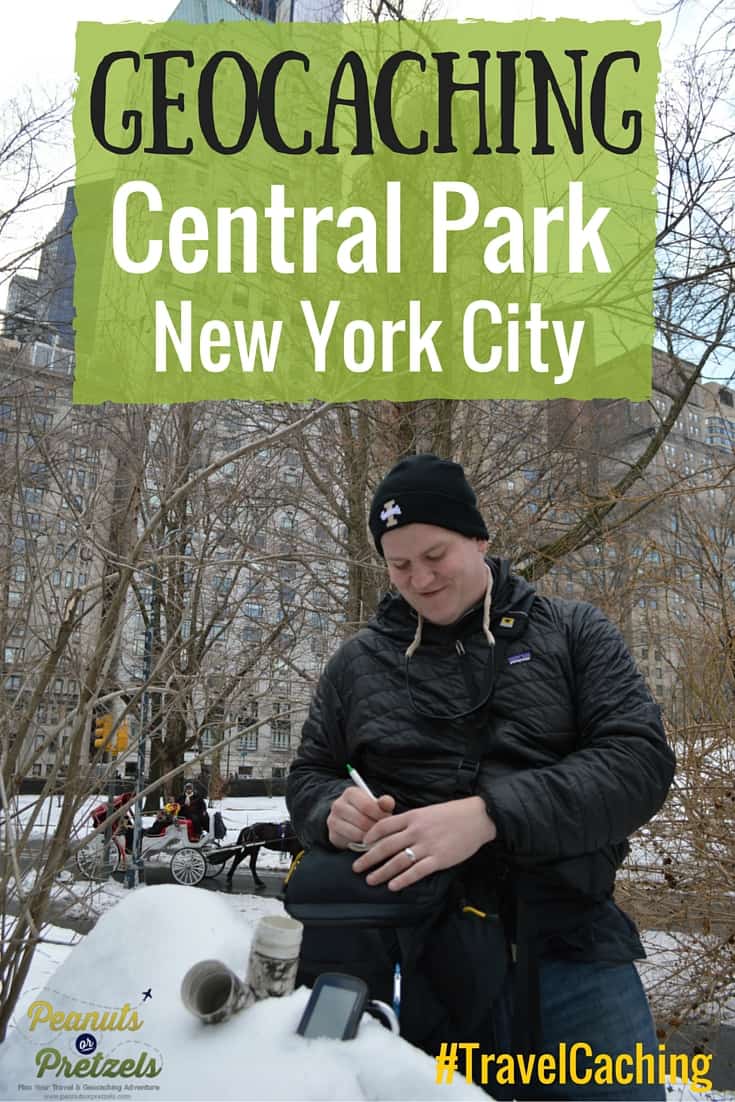 During a recent trip to New York City, it was a given that we would visit the iconic Central Park.  Being geocachers, we also knew that Central Park is known for some creative and beautiful caches!  To top it off, we were visiting during the winter and a snowfall had covered the city.  So we were looking forward to an awesome experience geocaching in Central Park in the snow!

Prior to leaving Atlanta, we set up our Garmin GPS with caches all around New York City…and there are a lot!  Luckily, our Garmin 650T is able to store over 4 million geocaches at one time.  Considering that there are only 2.3 million geocaches hidden around the world, we don’t have to worry about filling the GPS.

Central Park is a very special place of all the activities to do in New York City, and you can see it and feel it the moment you step into the park. On this particular day we saw families having snowball fights, people sledding down the hills, horse drawn carriages passed by with couples snuggled up in blankets and drinking hot beverages, and people were ice skating; it was a truly beautiful scene all around the park!

As soon as we arrived at the park we wanted to grab our first cache right away, and luckily, there was a cache right near where we entered the park.  Cachers know what I mean about having to get that first one out of the way. Once we figured out the correct trail to get on, we used the footprints in the snow as the hint to help lead us to our first find in the park.

Once we signed the log and replaced the geocache, it was time to wander around and enjoy Central Park in all its snow-covered beauty.  Growing up in Georgia, I had always wondered what Central Park was like; so I was excited to check it out.  With the snow cover everywhere it was like walking through a real live postcard.

After visiting a couple sights, including John Lennon’s Imagine marker, we were ready to hunt out another geocache.  We sat down to look through our GPS and see what cache to go for next.  We found a cache on the other side of a nearby lake with several Favorite Points, so we took off in that direction to see the view that everyone in the comments were raving about.

The path we needed to take was on the other side of a lake from where were sitting, and it turned out to be a fun trail to walk!  There are miles and miles of trails in Central Park, splitting and merging, winding around and over hills; it was almost like a maze trying to find which trail we needed to take.  The ice and snow that covered the trails made for an even more fun hike to the geocache.

While wondering around on the trails, I was thinking what it would be like to be a New Yorker taking advantage of this beautiful park in your back yard.  We love day dreaming like this when we travel.  It allows us to get a sense of the people and day to day life of locals.  Having a beautiful and massive park like Central Park would be so much fun live and cache in.

After exploring the trails (and throwing snowballs at each other from a bridge) we made our way around the lake to the location of the cache.  As soon as we arrived we could see why this one is heavily favored.  The beautiful view of the city across the lake made the trek to the cache well worth it!  But we weren’t done yet, we had arrived at the location but now we needed to find the cache and sign the log to get credit for the find.

So we started our search, trying to be as discreet as possible because of all the muggles around.  This turned out to be a very tricky cache.  With large rock formations and numerous cracks that could have been the hiding spot for the cache, we realized it could be hidden anywhere!  But we were determined to find this one.  We moved all around the rocks and searched everywhere that we thought we would hide the cache.  After several minutes we came up with nothing.

Frustrated, we took a break to enjoy the view and gather our thoughts.  We decided that we were not going to walk away with a DNF (Did Not Find), so we resumed our search.  After quite some time later, it was starting to get closer to dusk and Liz was getting hungry for pizza (such amazing NY pizza!) and as we were just about to walk away, we spotted the cache.  This was a fun cache because it was big enough to move Trackables around.  Most caches we found in the city were micro because of the discreet nature of cachers in the area, so we enjoyed being able to trade some trackables with this one.

This cache in Central Park will go on our list as one of our most favored caches we have found around the world.  With the beautiful view from the cache, the difficulty of discovering it, as well as the adventure of hiking the snowy & icy trails, it’s an easy top 5 Adventure Cache for us.

We also saw that there were several puzzle caches in Central Park, but we didn’t have time to discover them; perhaps next time!  If you are going to explore Central Park and have the time then you will want to try the world famous Bridges & Arches of Central Park cache.  Overall #AdventureCaching around Central Park was an awesome experience, and a great way to explore the park.