It was a typical hot Bangkok day outside, but the AC in this classroom made it almost chilly. Our shoes are off, typical in Thailand, so my toes are a bit cold. Josh and I have wedged our adult bodies into children’s school desks, you know the kind with the chair and the desk attached. Sadly, they don’t leave much room for our big American butts. But the situation around us completely fades out of our minds the moment that he begins to speak; the monk dressed in orange in front of the classroom. We didn’t know it yet, but over the next hour we would be inspired beyond words.

Our Sit Down Interview with a Monk

Mahatna Koon Sura Phet was his name. He is monk in Bangkok, but also the Abbot for the Temple English school here at the Wat. And while we have seen many glorious Wats all over Thailand, adorned with gold and jewels, this is not one of them. It’s a very non-descript Wat, you wouldn’t even know it is here as you drive down Charoen Krung Road, which runs parallel with the Chao Phraya river south of the Grand Palace in the Silom District of town. 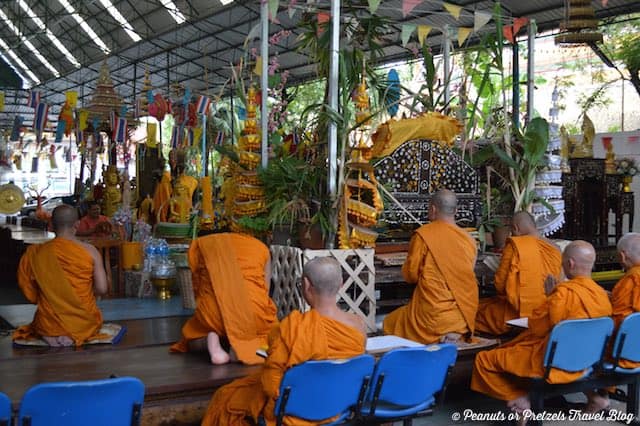 We were here specifically to chat with Mahatna Koon Sura Phet, thanks to our amazing Airbnb host here in Bangkok, Mac. Mac, an American expat, who did some English teaching here at the “Natural English Study Program” (as they call it here at the Wat), and he also was learning a bit of Thai here. Over the years he has become friends with Mahatna Koon Sura Phet, but mostly he is inspired by him; as all are who meet him. He was kind enough to set up a private meeting for us, so that we could interview this amazing man who teaches so many.

Enough About Us…We Want to Learn About You!

The first thing we noticed about Mahatna Koon Sura Phet was his smile. He greeted us with the biggest, most kind hearted smile. Although Thailand is known as the “land of smiles,” his struck us differently. Immediately the vibe in the room calmed down once he entered, and we felt so peaceful, yet energized. Somehow, even just his presence was inspiring. Sitting in the desk across from us in the classroom, he seemed just as curious about us as we were about him.

The monk asked us all kinds of questions about our lives and what we were doing in Bangkok. Specifically, he was very interested in our desire to travel the world. He told us that so far he had been able to travel to 7 countries, all in Asia.  But he really hopes to be able to see more the world himself.

An interest in travel is one of many things we had in common with this wise man.  He too believes that traveling the world provides an education and wisdom that cannot be taught in the classroom.  We also wholeheartedly agree with him that education is one of the most important things in the world…and that you should NEVER stop learning.

It was easy to see that Mahatna Koon Sura Phet was a humble man. Of course, he is a monk. But the more we spoke with him and learned about his life, the more impressed we were. It’s incredible what he has accomplished, truly inspiring. However, we honestly don’t know if he fully understands just how inspiring his story is.

Traveling From the Countryside In Search of Knowledge

Mahatna Koon Sura Phet has been a teacher at the temple English school here for 19 years, although he has been a monk at the Wat for 27 years. He grew up in the countryside of Thailand, in a very poor village. There were no good schools where he grew up, and his family didn’t have money to send him to school. But he wanted to learn. He knew in his heart that learning would be the path to a better future.

So at 18 years old, he followed a friend to Bangkok and this Wat. He met with the Abbot and told him how much he wanted to learn. So that Abbot let him stay. He became a monk and has lived here every since.

Proof That Anyone Can Accomplish Anything, If They Choose

Ever since coming to the Wat to live and learn, his life has flourished. Both Josh and I couldn’t believe all that he has learned. First of all, he learned English, as well as other languages.

Not only did he go to college, but he is currently getting his masters degree…in computer science! Who would have thought, a monk who can speak multiple languages and build websites! As he told us, he believes that knowing different languages is hugely important in the modern world, but he also believes that knowing technology is more valuable. He even teaches other people about computers and how to build websites. His wisdom is aligned perfectly with the modern world that we live in.

Who would have thought, a monk who can speak multiple languages and build websites!

As if that wasn’t enough, he told us that when he finishes his masters degree that he plans to pursue his doctorate. As he put it, “When I accomplish one thing I move onto the next. That is how it goes. I never stop learning.”

Wow. That statement really resonated with me, because I truly feel the same way. You should never stop learning, and you should always seek out opportunities to continue to learn. But I can’t help but be impressed at all he has been able to accomplish. He really is proof that anyone can do anything they want to, if they choose to do it and put in the effort.

Now he is the Abbot at the temple, and somewhat of a headmaster for the temple school here. Mahatna Koon Sura Phet said that he has a real passion for teaching, but particularly English because it is so popular…and so valuable! He said that 90% of the students here at the school want to study English.

The Temple School runs two programs, one is paid and the other is FREE and runs on volunteer teachers. They have really grown over the years and now have 4 classrooms, plus 6 new ones being built. The school runs entirely on donations and receives no financial support from the government here in Thailand.

With great pride, Mahatna Koon Sura Phet told us that some kids from the school have gone onto America, and many have gone to college.

Being Inspired By a Monk – Who Loves Photography!

While we were being blown away at all this man has accomplished, he continued to want to learn about us. He told us that it doesn’t matter if people are rich or poor, he wants to know how people LIVE! In fact, that is one of the reason’s he has gotten into photography. Yes, a monk who loves photography. He even has the same camera as Josh! He told us that he doesn’t go anywhere without his camera, because he never knows when he might find something beautiful to photograph. 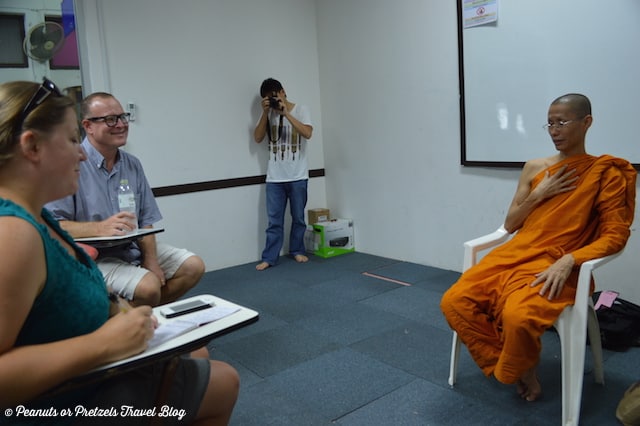 Even having a Royal title from the King of Thailand, Mahatna Koon Sura Phet was one of the most modest and humble people that we have ever met. While we were so interested in all that he had achieved, he spoke most warmly about all that he had done to give back to other people and to the community. One example is when he told us about his trip to Myanmar / Burma. He said that they treated him so well by taking him around and giving him food. He said that whenever he gets good service or when people take care of him, he feels very happy and wants to do the same for others.

And so, he does. He has done so much for other people over the years, including the children at the temple school. For more information about the temple school, you can visit the website (that he made) at http://www.nesc-center.com/ or their Facebook page here. As a nonprofit who does not receive government funding, they are always in need of different types of donations.

We have to say that we didn’t know what to expect when we headed to the temple for our meeting with Mahatna Koon Sura Phet. But we left feeling completely energized and inspired about life. He was such a kind-hearted man with a humble nature. We cannot thank him enough for taking the time to sit down with us and chat, especially when he is so busy!

But it was an experience that we will never forget, and we hope that one day we can have a positive impact on lives the way that he has. He is truly an inspiration.

** If you are interested, please consider making a donation to the Natural English Study Program www.nesc-center.com.  Whether you can donate books, equipment, money, or simply volunteer your time while you are visiting Bangkok, your kindness is greatly appreciated. 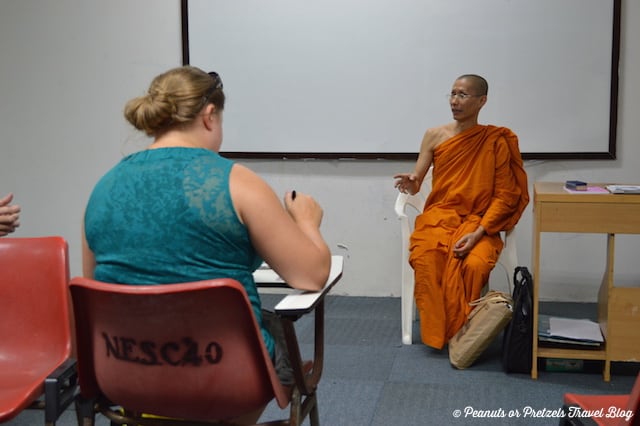 Plan Your Trip to Thailand With Our Thailand Travel Guide!